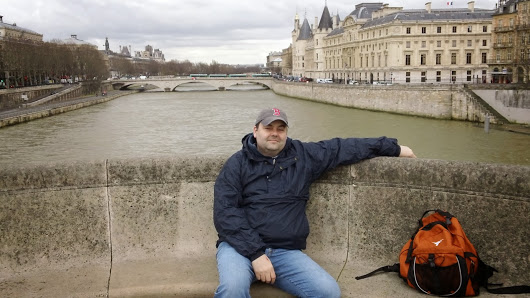 Aaron Blais was nominated by a former student who wishes to remain anonymous.

Exeter High School has always encouraged students to try their best and treat each other well. Few have accomplished this mission at the level Mr. Blais has. He connects with his students on a deep level and challenges them in every way. On the first day of class, Mr. Blais creates an easygoing, yet challenging environment by stating his rules, which challenge students to do their best. Through his teaching, he successfully encourages his students to become outstanding citizens and responsible adults.

"From the three semesters I have had him as a teacher, he has shown me how to be a better citizen on a daily basis," his nominator said. "After experiencing AP US history with him my sophomore year, I recognized a change in myself. To him, we were adults, and we were given the responsibilities and expectations that came with the title. Through this, we gained an important aspect of ourselves, one that propelled us in our high school career: maturity."

"Before I took Mr. Blais’ class, I knew little about history," the nominator continued. "There is a well-known phrase 'history repeats itself.' I always thought history teachers used it to try to make us listen while learning about Silk Road or another subject that seemed inherently boring. Through his class, I discovered the phrase was absolutely true. He wanted to encourage his students to want to learn and not come to class solely because U.S. history is a required subject. I enjoyed his class because he put so much effort and enthusiasm into the subject he taught. When someone shows their enthusiasm in a subject, it influences others to become involved. Mr. Blais is one of the sole reasons I became involved with politics and United States history."

While many teachers add to their classrooms with captivating activities and lessons, Mr. Blais also brings excitement to the entire school and community. His US Law students, for example, worked together to discover an inmate who seemed to be innocent. A few times a week, they would gather information, organize it, and try to prove their inmate's innocence. Mr. Blais brought in his friend, a professor from UNH, and one of his law students to work on the case. Mr. Blais discussed how the project wasn't just an interesting project, but something that could help students develop their creativity, organizational skills, and teamwork.

As a veteran who served in Afghanistan, Mr. Blais is able to teach his many classes about war with an insider knowledge. He has connected with many members in the community who served as well. Every year, he hosts the EHS Veteran’s Day assembly. He brings members to talk to the school about service and the importance of community and communication. His US History Through Film class helped with the assembly this year. He had been working on a project with them to interview veterans about their service and their life after. The project has brought the students much joy and even gained attention from the CBS station who plans on making a documentary in the future.

"Mr. Blais has changed not just my life but so many students, faculty, and community members lives," his nominator said. "I wish he could get more than a plaque, but truly, I wish he could know how amazing he is to our community."