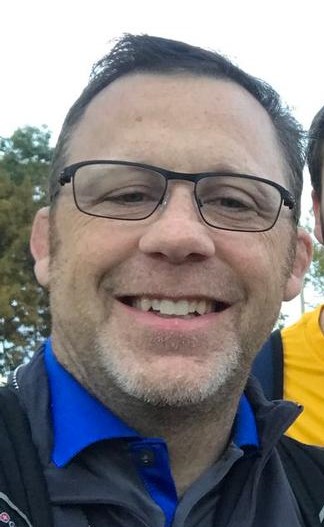 Bryan Hazard was nominated by Michael Mukai, the parent of a student.

This quote describes Mr. Hazard perfectly. Mr. Hazard and Mr. Mukai met 31 years ago when they were teenagers; both student-athletes for different schools. Mukai was more of a student than an athlete, and Mr. Hazard was a star wrestler for the Robinson Rams. Mr. Hazard was always an ambassador for wrestling and found a way to share his passion for the sport.

They crossed paths again after college, both teaching and coaching for their alma maters. As a teacher, Mr. Hazard helped students make the transition from elementary to secondary school. He has helped many students deal with the social and emotional changes that come with middle school.

"Bryan has literally saved lives," Mukai said. "There have been times when students suffering from emotional challenges have turned to Bryan as a resource, and he has steered them toward more positive choices."

As a coach, Mr. Hazard has successfully led teams to state championships and national rankings. He has served as part of the Virginia Wrestling Association Board and coached multiple national teams. While he developed elite teams and coached the highest level athletes, Mr. Hazard always found the time to support developing programs, like the teams that Mukai was coaching. Mr. Hazard opened his room during the off-season to athletes from all schools and was a supporter for all coaches.

"I turned many times to Bryan for advice over the years to help develop my own program," Mukai said. "My career path led me to administration, and I next worked with Bryan as an administrator at Robinson. I was fortunate to see Bryan working with his students in the classroom. It was wonderful to see that he instilled the same philosophies in the classroom that helped so may find success on the wrestling mat. Dedication, commitment, and resiliency were fundamental lessons for every student. Dan Gable once said, 'Gold medals aren't really made of gold. They're made of sweat, determination, and a hard-to-find alloy called guts.' Bryan helped his students build their strengths and courage in pursuit of their goals."

Today, Mukai is the parent of a Robinson Ram Wrestler who sees a lot of himself in his son.

"I wanted my son to share my passion for wrestling, but I was worried about his athletic success," Mukai said. "Bryan spoke with me and shared important lessons for me as a father. He told me that he had a goal for my son Thomas. He wanted him to work on being more social and build confidence as a part of a team. Bryan told me to let Thomas focus on himself as a person and the wrestling would come."

Mr. Hazard had coached his own son and passed on lessons learned through his experience.

"I followed Bryan’s guidance and watched Thomas develop many friendships among his teammates," Mukai said. "I watched as Thomas developed into a mature and more confident young man. Even when he broke his leg in January of his freshman year, Thomas continued to enjoy the successes from being a teammate. He went on to win the Virginia State Championship his sophomore and junior years and I am looking forward to his senior year, but I will always remember his freshman year when he found his confidence."

Mukai has watched Mr. Hazard help so many student athletes become successful adults. Mr. Hazard’s wrestlers have gone on to become successful doctors, lawyers, soldiers, teachers and engineers. Each learned the most important lessons of life from wrestling: Grappling with fate is like meeting an expert wrestler: to escape, you have to accept the fall when you are thrown. The only thing that counts is whether you get back up.

Michael Mukai Posted over a year ago

I wanted to share the WJLA news story about my son, Thomas. It shows how much Thomas has changed under Bryan Hazard's mentorship. https://wjla.com/sports/rising-stars/robinson-high-school-thomas-mukai-fairfax-county