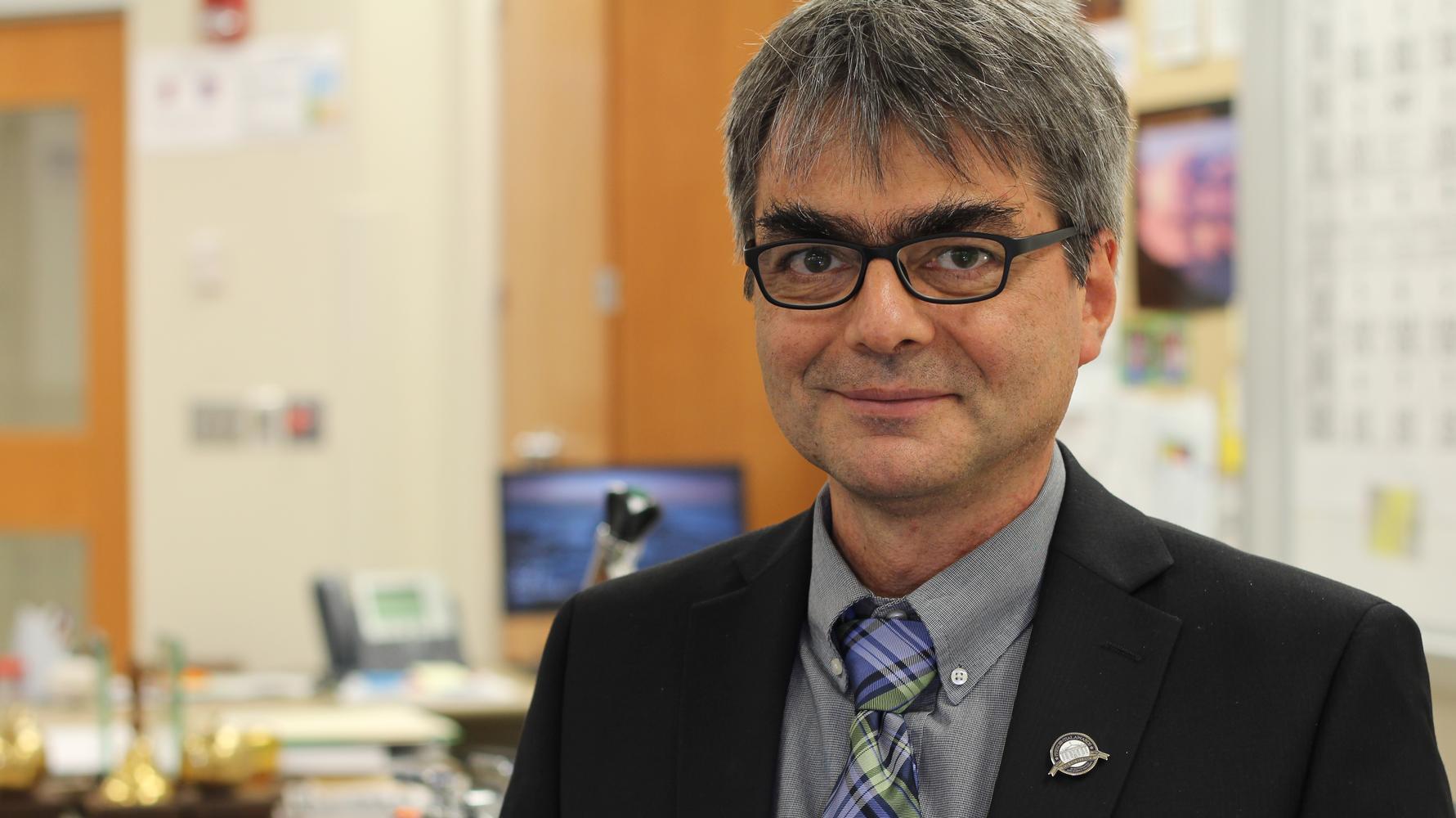 Paul Haiducu was nominated by his student, Andrew Langford.

As a freshman entering Avon High School, Langford wasn't certain about how his high school experience would turn out. One thing he knew for sure, however, was that he wanted to take Mr. Haiducu’s classes.

"Having an older sister in the program, I had heard the countless stories of how Mr. Haiducu taught his students differently than other teachers," Langford said. "He created an environment that focused on learning and experiencing physics in the real world. The result of this enriching environment is that students are exposed to very high-level topics and are allowed to make mistakes in their pursuit of a higher understanding of the material. Personally, after experiencing over 450 hours of Mr. Haiducu’s artful craft of teaching, there is no doubt in my mind that he is a LifeChanger in the Avon community."

Over the past 19 years that Mr. Haiducu has taught at Avon High School, hundreds of his students have gone on to be successful engineers. Many of his previous students may not directly use the physics they learned in his classroom on a daily basis, but they all agree that his instruction was influential on their education. One of Mr. Haiducu’s defining traits as an educator is his witty sense of humor that captures the class’s attention to the topic of discussion. Whether he's telling a story about cows in Romania to describe currents and voltage or purposely overdoing the pronunciation of a word, Mr. Haiducu always keeps his classes eventful and entertaining. These fun classroom experiences help students develop a growing love for learning, no matter the topic.

"One of the most admirable traits of Mr. Haiducu is his love of giving back to the community," Langford said. "He does this by providing free physics shows that combine thrilling demonstrations, hilarious comedy, and powerful learning experiences. Recently, I had the opportunity to assist Mr. Haiducu in three of his shows aimed towards elementary school students. I had long known about Mr. Haiducu’s masterful craft of exciting high school students about physics, but I was truly in awe of how he adapted complex physics principles into a show that electrified a crowd of hundreds. After the show was done, many of the kids came up to me to learn more about the science behind the action. By inspiring the next generation of not only scientists, but also learners, Mr. Haiducu is truly a LifeChanger in our community. He has been a LifeChanger for many Avon students during his career."

Mr. Haiducu received a Presidential Award for Excellence in Mathematics and Science Teaching in 2013, and was a finalist for the Varkey Foundation's Global Teacher Prize in 2016. He recently started a GoFundMe campaign to raise money for his Power of Physics project.

Paul Sanders Posted over a year ago

I had Mr. Haiducu for 3 years for honors physics, AP Physics C: Mechanics, and AP Physics C: Electromagnetism. Mr. Haiducu is one of the most phenomenal educators that I have ever had the honor of learning from. His command of material and helpful learning techniques is second to none and his personal investment in his students is astounding. Mr. Haiducu runs classes much like many I have seen in college, but at a level comprehensible by high school students. As a junior at Embry-Riddle Aeronautical University, I can comfortably say that much of my success is thanks to his attention and support to and of my STEM education. There is only handful of people in my life who I know have helped me become who I am today, and I know for a fact Mr. Haiducu is a life changer! Huge thanks to Mr. Haiducu - I wouldn't be where I am today without him.

Sen Wang Posted over a year ago

I was honored to be Mr.Haiducu’s Student for two years, his enthusiasm and support was the driven power that kept us through AP Physics.He created a great community around his power of physics show, which also inspired me to move further into studying physics. But all in all, he was a friend of the common students and it’s always my pleasure to support him in whichever way needed.

Liza Russell Posted over a year ago

Mr. Haiducu absolutely changed my life. I owe my success in Purdue Mechanical Engineering so far to him. He changed my worldview and helped me grow both as a person and academically. He was my physics teacher at Avon for three consecutive years and through that time he managed to change my life and many of my classmate's lives. The other comments here show how much of an impact Mr. Haiducu has had both on his colleagues and on his students. The passion he shows for education comes out in the classroom and in the community through his Power of Physics show. I feel truly blessed to have been one of his students because without him, I would not be where I am professionally, personally, and academically today.

Kevin Badger Posted over a year ago

Mr. Haiducu was one of my most influential teachers at Avon. His class was always engaging and fun, and it help set me on a successful coarse as an Aetospace Engineer. I was also in one of the first classes he taught at our high school (hi Jessica!). Such wonderful memories of my experience learning physics from Mt. Haiducu.

Jennifer (Ford) Dillon Posted over a year ago

He is a fantastic teacher. I was lucky to be in one of the first classes he taught at Avon and glad to be there!

Lisa Kern Posted over a year ago

I have had the pleasure of teaching with Paul Haiducu for seventeen years. Paul is an incredible teacher who inspires his students, but he is also a wonderful friend and colleague. In that time, he has taught me a great deal about how collaborative teachers should be. He is always ready to drop what he’s doing to help me with lessons for my Chemistry or AP Environmental Science class that border on physics, to write letters of recommendation for my grant applications, to edit and advise me on those applications, to commiserate and solve classroom problems, and to help test out those tricky demonstrations that just might go awry. I know I can always draw on Paul’s professional and life experiences and trust that he will be honest and provide valuable feedback to me. He sets an example for teachers and students in our school each day by sharing his love for physics through his Power of Physics video series. Even my own children, ages 11 and 21, know him as “the Power of Physics guy” and look forward to going to see his annual shows. Paul’s ability to reach the youngest members of his audience and entertain them while teaching deeper physics concepts to the older audience members and include high school students as teachers is phenomenal. If he were to win this award, he would likely invest every bit of it into his physics outreach to fascinate and amaze even more students! Paul is truly a Life Changer and is very deserving of this award!

Ruth Enlow Posted over a year ago

I have known Paul Haiducu since 2000. He was my son's physics teacher. He truly loves physics and sharing that love with his students. Avon High School is lucky to have him. Had there been a physics teacher like Paul when I was in high school, I would have been first in line to register for the class instead of avoiding physics like the plague

Tammy Condon Posted over a year ago

I worked with Paul for 5 years. He's one of the most enthusiastic Physics teachers I've ever met. He always puts the needs of his students first. Constantly changing up how he teaches to fit his particular group, Paul makes Physics come alive. He created his own yearly Power of Physics show, run by students, to help spread thew word about his classes and engage his students even more by making it real and relevant. He invites the public to come see the show too, so he's advocating forthe good things happening across the school district too!

Stacy Williams Posted over a year ago

Paul puts his heart and soul into his class and helping his students grow in their curiosity for science/physics. Students love his class!

Ryan Enlow Posted over a year ago

Mr. Haiducu made physics enjoyable. He went the extra mile to make it relatable to his students. His passion for teaching is obvious via his physics videos and innovative teaching styles. I still use some of the simpler concepts he taught me in my everyday work. Best of luck Mr. Haiducu!

Mollie Gregory Posted over a year ago

Over the years that I taught with Paul, we also became friends with a mutual respect both personally and professionally. As an English teacher who never studied much science myself, watching the way he explained physics in his classroom and used creative yet applicable explanations opened my eyes to the universality of science. Paul Constantly inspires his students and teaches them far more than just a subject in school. His Power of Physis (POP) shows are impressive and fun as he fascinates younger children (and their parents) with the “magic” of physics. Paul’s energy, creativity, and enthusiasm are seemingly endless. His students and former students rave about how much they learned from him. He embraces the challenges of preparing students to be global citizens. His teaching has been recognized in several ways, including being one of the top 50 in the world for the Global Teacher Prize and receiving the PAEMST (Presidential Award for Excellence in Mathematics and Science Teaching) Award. He has also received numerous educational grants to pursue his constant quest to broaden his effectiveness as an educator and absorb new experiences. Now that I’m retired, working with Paul on editing grants and proposals revitalizes me. Seeing the world through his eyes offers unexpected perspectives that broaden my thinking. His boundless energy and creativity inspire me. Paul Haiducu richly deserves the honor of being named Life-Changer of the Year.

Patryk Baranski Posted over a year ago

I had the honor of nominating Mr. Haiducu as my Influential Educator at the Indiana Academic All-Star reception, and I wrote a brief summary of what makes this man so special and deserving of any recognition as a LifeChanger: At every high school, there exists a subset of teachers that have instantaneous name recognition; educators who, for whatever reason, make students want to take their classes and are famous for either their lectures or personality. In my case, Mr. Haiducu is the best of both worlds. As an underclassman, I constantly overheard of this legendary Romanian man, who was a physics powerhouse and a great storyteller. And luckily for me, I had his AP Physics class in my Junior year and immediately recognized what made him the famous figure that he was: he was more of a friend than a teacher. Given, his lectures were fascinating and dove into concepts many other teachers would merely skim over, but by far his most outstanding quality would be his ability to push students and still toss around jokes and side stories like it was no one’s business. He destroyed the stigma that teachers were there to make students’ lives miserable: he was right there with us, fighting the battle against calculus and physics. He showcased that teaching is meant to inspire and enable, and you should have fun while you’re at it.