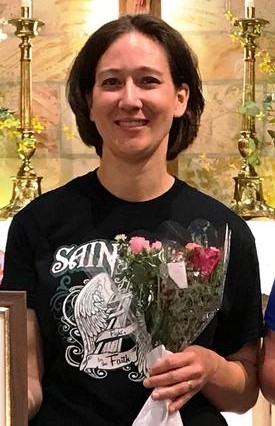 Janice Gaubatz was nominated by her principal, Pierre Antoine.

Mrs. Gaubatz began her career at St. Ann in 2016. Since then, she has been a stellar religion and science teacher. What sets Mrs. Gaubatz apart from many others, however, is her devotion to making a difference, not only in her students' lives, but in the lives of those within the community. Last year, Mrs. Gaubatz oversaw the Works of Mercy program to help her school serve those in the community. The students led donation efforts for shoes to create clean water in Africa, provided clothing and necessities for those imprisoned at a local jail, and carried out other projects that led to St. Ann receiving the Belleville Diocese's Sr. Leona Luechtefeld Award for service.

The award came with a check for $300 - $100 for Mrs. Gaubatz, and $100 for each of the 5th/6th grades and 7th/8th grades to pay it forward. Mrs. Gaubatz allowed the students to choose their organization to receive their donation, and the 5th/6th grades chose Project Rachel. However, with Mrs. Gaubatz's leadership, they took that $100 and added over $1,000 of donations generated by recent bake sales and raffles at local churches. The 7th/8th graders chose the Williams Syndrome as their project and have already raised $100 for this endeavor, even though an organized campaign has not yet begun.

"There are thousands and thousands of teachers throughout this world who care and are marvelous at their craft. Mrs. Gaubatz is one of many teachers whose goal is to mold students into servant leaders," said Antoine. "And I can tell you she is doing just that, every day."