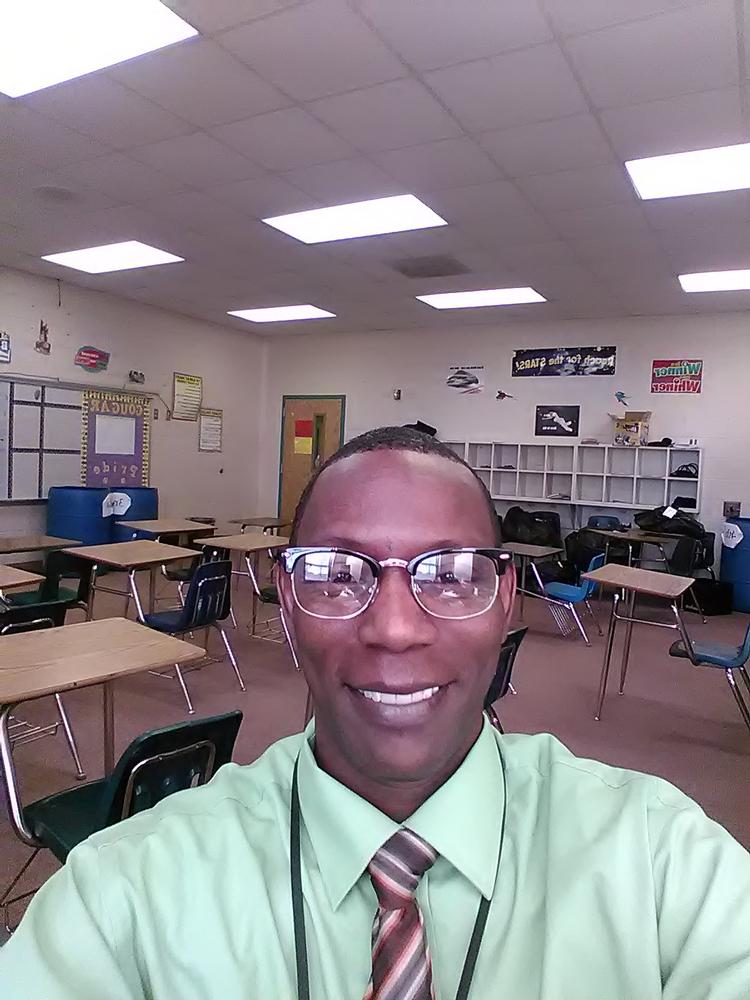 Eric King was nominated by an anonymous colleague.

Mr. King is a true example of a leader and role model! His main goal is to change a student's negative behavior to a positive one. On any given day, you will catch Mr. King walking through the hallways giving high fives and words of encouragement to the students. Every student loves Mr. King, and they look forward to seeing him each day. Even though Mr. King's job titles states that he is the ISS teacher, he carries many roles and responsibilities at his school. He is always available when called on by administration to supervise classrooms when teachers are pulled for meetings. Mr. King is a counselor to students on a  daily basis when they need someone to listen. He is also a very talented artists who drew murals for the third grade hall.

Mr.  King is also the director of the Brother's Keeper's program at Edisto Elementary School.  This program is geared to reach young men who may be struggling with behavior issues, social issues, academics, environmental issues, etc.   He has around 60 boys in his program. Once a week after school, Mr. King dedicates his time to mentor these young men, and he has made huge changes in their lives. He has taken students with extreme behavior issues and turned them around into being honor students and star students in the classroom.  He also takes them on field trips and encourages them to be mentors to the other students in his school.  Mr. King is an excellent role model and has done great work in changing the lives of these young men.

Mr. King is also the head basketball coach for Carver Edisto Middle School.  He has had winning seasons for the past two years and is looking forward to a great season this year.  He leads these boys on and off the court.  Not only does he coach them basketball, but he encourages them to be better young men.  He applies the same rules for the boys on his team as he does for the boys in his mentor program.

"Overall, Mr. King is very dedicated to his profession and his roles and responsibilities," said his nominator. "He is a wonderful father to his beautiful daughter. He leads by example and does his best to support his family and his colleagues. Mr. King is a very valuable member of our team!  He is a true example of a LifeChanger because he is changing lives every day!"

Tralcia Posted over a year ago

Mr. King epitomizes the true meaning of being an educator. He has the ability to motivate the students he comes in contact with on a daily basis. He is passionate about the boys he mentors and all the students in the school. He is a very respectable individual who is very gifted in giving advice. He has the ability to motivate students who are sent to him in ISS and also creates a positive impression on their character. He is a light for his colleagues and does a very good job at keeping the inner fire alive in others. He is truly deserving of this award.

Kiara Posted over a year ago

Time is the most valuable thing you can give anyone. The time that Mr king puts into the students, is what make him a life changer . Mr king teaches valuable lessons that will help the students later on in life .

Chloe Thomas Posted over a year ago

If you read Galatian 5:22-23 and verse 25, you will have a clear picture of Mr.King as a man and leader. Mr. King is an inspiration to many especially the students at Edisto Elementary School. His love, patience, kindness and generosity are shown daily whether he is mentoring boys in his youth program or mentoring boys on the basketball court. Mr. King is committed to changing the lives of our youth at work and within the community. I am proud to show my support to Mr. King as this years nominee for Life Changer of The Year. Congratulations on your Nomination!