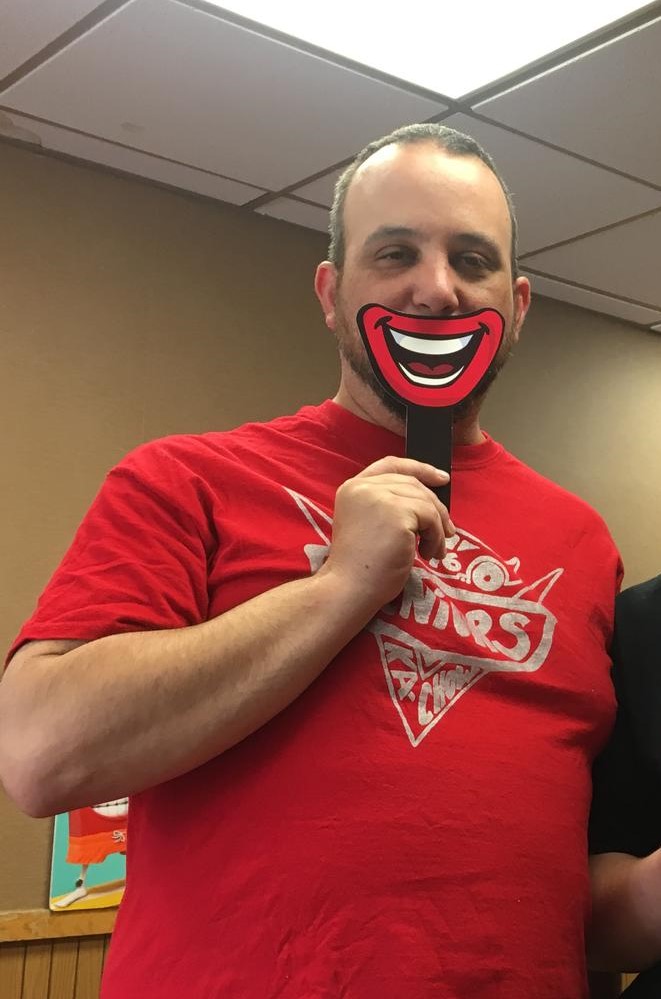 Nathan Roberge was nominated by an anonymous parent of a former student.

"I'm in a unique position when it comes to knowing Nathan Roberge," said his nominator. "I've known him since we were both in high school. I have worked as a paraprofessional in his classroom and in his summer program, and I am the parent of one of his former students. Nate is one of the most influential teachers that students have on their journey through the school system in Berlin. He has an amazing way of connecting with students, especially the ones who are traditionally walled off. I know this first hand, because Nathan helped to save my son's life."

"I don't say that metaphorically or as an exaggeration. He was there for my son through the darkest years of my son's life," the nominator explained. "Nate was the person who my son sought out when he was struggling at school or home. He opened up to him about how he was feeling, and Nate guided him through those tough days. The three years my son was at the middle school were some of the most difficult any child could face. His father and I divorced, he was being bullied relentlessly, he had no self confidence, and he struggled academically due to severe anxiety and ADHD. Nate never wavered in his efforts to help see him through those days. He was able to calm him, get him to see things rationally, and have a conversation about whatever the problem was at that moment, until the day my son hit rock bottom."

"As a seventh grader, my son was put on medical leave from school for the last two weeks of the year by his counselor," the nominator continued. "Nate saw him through that entire year, listening and guiding him. He never judged or discounted his emotions, and always made time for him while still taking care of his duties as a science teacher. As part of my son's behavioral plan, his school put in place that he have access to speak with Nate when needed, having seen the strength and value of their relationship."

"On the lowest day of his life, my son said that being able to talk with Nate made him realize that he needed help and had to do something to make the feelings he had stop or he wouldn't be alive much longer," said the nominator. "Those are impossible words to process for a parent. I knew he was struggling, and we talked regularly, but there are some times when a parent's words just aren't what a kid needs. He needed someone he felt knew him, understood him and was neutral about the situation. Nate checked in on him regularly, and made an effort to continue to encourage him, and still does three years later."

"As he began his last year at the middle school, my son still relied on Nate to help him manage his anxiety, but this time he was more in control. Knowing that he had made huge strides over the summer, Nate knew that the relationship had to change in order to help get my son to the next level," said the nominator. "He began to 'call it as he saw it,' and had my son make some tough decisions and be honest with himself. Although it wasn't always what he wanted to hear, my son knew it was what he needed. He didn't resist the advise he was given. As a sophomore now, he still thinks back on those conversations as a reminder of not only where he was, but how he got to where he is now."

"A lot of what Nate does for kids like my son is simply because he is a wonderful human being and teacher. The rest comes from his years of experience, both personally and professionally," said the nominator.

Mr. Roberge has spent his last few summers working in the special education department as an extended school year teacher. Having worked closely with kids with varying challenges, he has been able to expand his understanding of the students he works with by watching and learning from them all. He takes something from each of them and puts it to use during the regular school year.

Mr. Roberge doesn't keep what he learns to himself, either. He has talked with the entire staff at BMS about what he has learned, and has become an advocate for all students. He has attended workshops and conferences to grow as a teacher and mentor. Mr. Roberge shares what he knows with his high school baseball team, making them more compassionate and informed, as well. The skills he has gained off the field help him on the field, and vice versa.

"Having worked with Nate for the last several years, I have been impressed with his growth. He is truly in it for the kids, and wants to give them all the best experiences that he can," the nominator concluded. "He leaves them all with a lasting impression, and it is a positive one at that. Every student loves him, and respects him - two difficult things to achieve with middle school aged kids. I could not have asked for a better teacher to guide my son when he needed it most. I am honored to be able to work with him and see him continue to help other students."