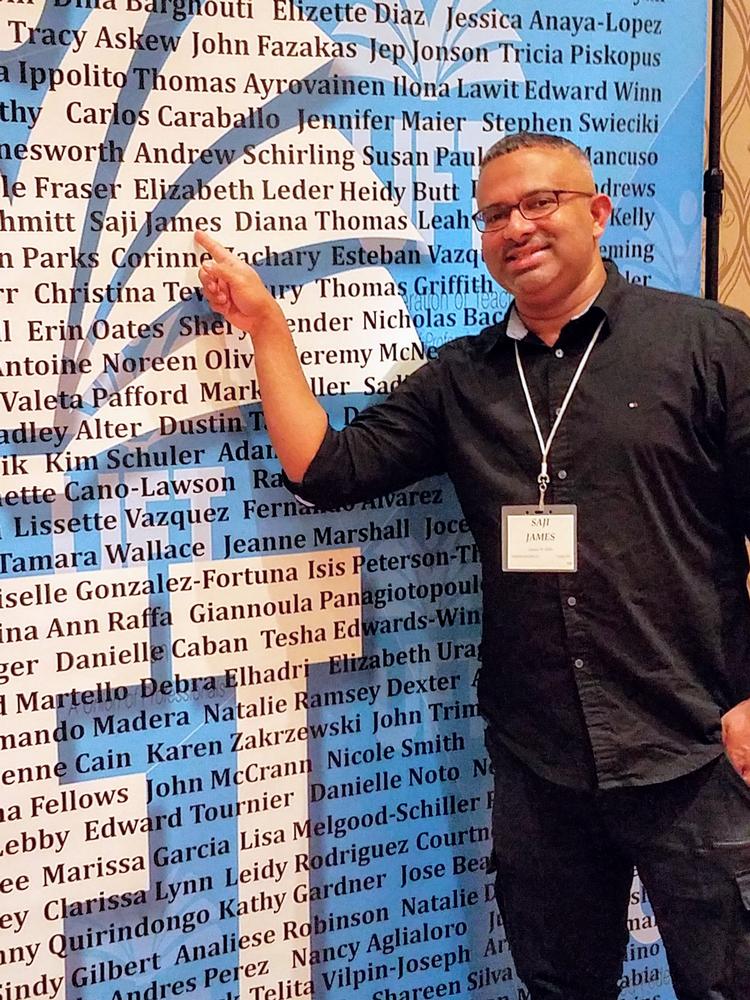 Saji James was nominated by his colleague, Ida White.

Mr. James has been a World History and Economics Teacher in the NYC Department of Education for the past 20 years. During that time, he has taught at a transfer or alternative school, where students get a second chance to complete their high school diploma in a smaller school environment.  During his career, he has used various methods to motivate his students and help them pass the World History Regents exam.  As a teacher in an alternative/ transfer school, he also plays the role of mentor and social worker to address the various problems and issues at-risk students face. At Concord High School, every teacher - including Mr. James - participates in an Adopt-a-Student program, where they “adopt” or mentor students until they graduate.

Mr. James has participated and created lesson plans for the NEH (National Endowment for the Humanities) grant that he received related to Eastern Europe and Muslim Voices in Poetry at NYU during the summer of 2013 & 2018.  Also, over the past 20 years, he has created differentiated lesson plans that immerse students in the study of history.  Some examples include asking students to place themselves in different periods of history such as the French Revolution or World War II and debating the pros or cons of various issues. One example was: Would you have dropped the atomic bombs on Hiroshima and Nagasaki during the end of WWII?

Mr. James is also a big fan of poetry and rap music, which he tries to incorporate into his lesson plans. One example was having students write a poem/rap about why a country should have independence from an imperialist power such as England or Spain. He has an amazing way of connecting with his students. His rapport with his students and ability to help them through their personal and academic struggles are both truly inspiring. He has been working with this "at-risk" population since he started his career fresh out of college 20 years ago. He always has time for his students during his free time, and the students he mentors come back and visit him to share their success stories.

Students at Concord need a second or third chance to finish their regular high school diploma. Mr. James realizes that every student has the potential to succeed, and he works with each of his students to give them every opportunity to pass his class. He also teaches them basic personal finance lessons/skills they can use in the real world after they graduate.

Mr. James won the Alfred P. Sloan Teaching Champion Award a few years ago. This award promotes economic education at the high school level by recognizing and honoring teachers who effectively deliver this important content in and out of their classrooms and achieve results. Winners of this award instill an understanding of economics in their students. They provide the tools to make informed and responsible decisions that students will carry with them as they grow into successful and productive adults.

In addition, Mr. James has been voted as this year's Chapter Leader or union representative at Concord High School. As the union rep, he has really helped his colleagues whenever they had any personal or work-related issues. He truly brings his entire school together. He has organized staff holiday parties and union-related activities every month to help teachers do their job to the fullest. The role of the chapter leader has singular importance in the United Federation of Teachers. The chapter leader is the vital link between members and the school administration, as well as the union’s officers, borough representatives, and district representatives.

Even though he has been teaching for 20 years, Mr. James still takes every opportunity to further his knowledge of World History or teaching practice. His thirst for knowledge and cultural experiences has provided him with various opportunities, including a 3-week study tour of China, as well as various summer institutes through NEH, Princeton University, NYU, Teaching American History grant program, and the New York City Department of Education.

"I believe that on a daily basis, Mr. James has demonstrated his proven ability to make a beneficial difference in the lives of students and the ability to positively add to the development of his school's atmosphere," said White. "His dedication to his students and colleagues is simply amazing and inspiring to watch. He makes everyone around him strive to achieve their best. If if wasn't for teachers like Mr. James, students at Concord would not achieve their goals and become productive citizens in society."

"Concord High School helps students avoid becoming part of the statistics of high school dropouts," White continued. "Mr. James always takes time to listen to his students and offer them any help, whether it be personal or academic. He will also constantly keep in touch with the students he mentors or student in his classes to make sure they pass their classes and eventually graduate high school. He truly represents what it means to be a LifeChanger."

Below is a list of Mr. James' professional highlights: