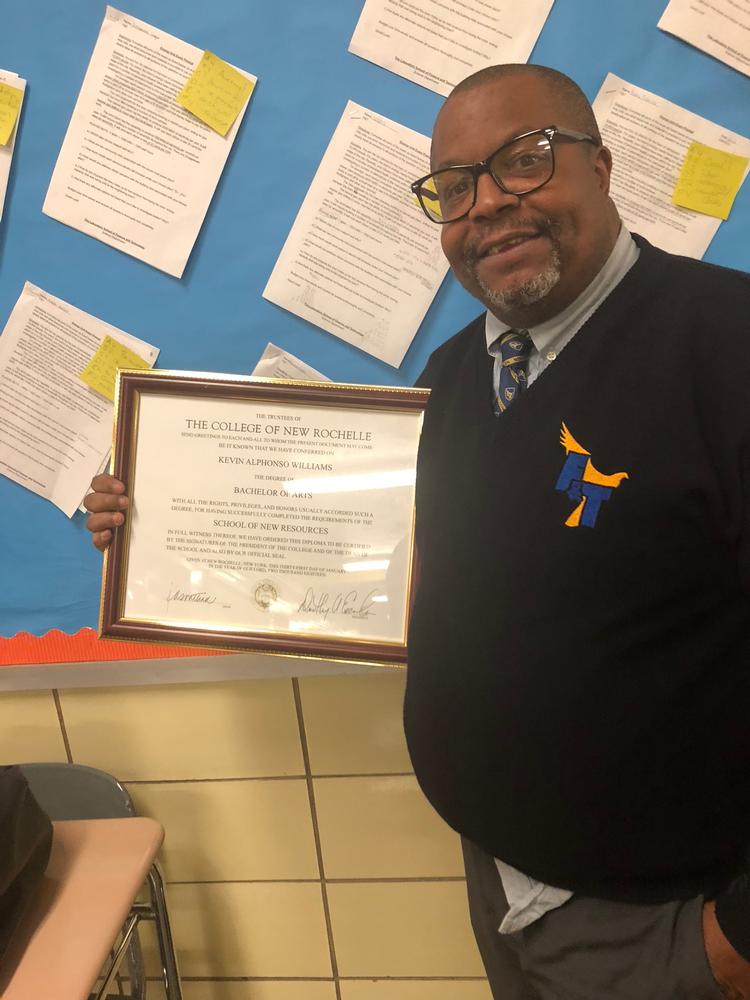 Kevin Williams was nominated by his colleague, Joseph Harrington.

Mr. Williams is the embodiment of a LifeChanger! Known in the community as “Coach," he has devoted his time and effort mentoring and supporting the students of Middle School 223 for the past 13 years. His compassion and community-integrating approach has been developed over a long career in youth development.

Coach speaks to students and staff with a deep motivational wisdom that enriches the larger learning community. He is an ambassador of positivity and understands that the power of an organization is its people.  Coach regularly injects humor and a lightness of being into the atmosphere. In the South Bronx, this can go a long way, as there are great challenges the students and staff face on a regular basis.  He is greatly beloved in the community of Harlem and the South Bronx, where he has enhanced the lives of thousands of students, athletes, and young people through his relentless work in the community. He is a special leader who has devoted his vitality, wisdom, considerable experience, and clout to help build one of the best public schools in the New York City area.

Prior to coming to Middle School 223, Coach spent 20+ years coaching basketball to kids in Harlem. Basketball has been a gateway for him to motivate the students to become the men and women of the future. Coach’s favorite quote comes from the legendary basketball coach Pat Riley, ” Team first, Team last” That quote embodies his willingness to give his all for the success of his school and community, even if that means great personal sacrifices.

Coach has been pursuing a college degree over the past few years while working full-time and over-time.  His determination to succeed has been an inspiration to staff and students alike.  Coach often shares ideas and information he is learning at the college level in discussions with staff and students.  He is committed to the betterment of his school community. Recently, he was asked by school leaders if he had friends who were as devoted as he is so that they could be hired, as well. In reality, a man like Mr. Williams is a rare find.

Another profound measure of Coach’s legacy and influence is that an increasing number of students he has mentored over the years are now graduating from college and teaching in the South Bronx. For example, MS 223's gym teacher, Mr. Trawally, is one of Coach’s former players and students.  He is now coaching the Middle School girls basketball team, organizing summer tournaments in the neighborhood, and teaching high-quality physical education. Mr. Trawally is now passing on the lessons from Coach to the next generation of students.

Coach has made a huge difference in so many students' lives! There was another student who was intellectually challenged and struggled when he arrived at MS 223. Coach sat with him every day and helped him become an integral part of the school community. He introduced him to other students, arranged for high school students to mentor him, and ultimately helped him become one of the most popular students in the school. This student was transferred to a school that could better serve him, but he still calls Coach every day to check in and say hello.

"Coach is the definition of a life LifeChanger. His determination to further his academic education and skills is impressive and inspirational," said Harrington. "The example he sets for the community is powerful and generative.  Coach is widely appreciated and beloved in the community.  There is no question that he has positively changed the lives of countless young people and adults alike!  Coach is a LifeChanger!"

Nicole Posted over a year ago

Coach is definitely a life changer! A great educator is known amongst students, staff, and within the community! If you ask a parent about Coach, they will smile, if you ask the bodega manager across the street from the school about Coach and he will smile, if you ask a current student or alumni about Coach, they will also smile. Coach has been mentoring young men in Harlem for over 30 years. He has worked at 223 for many years and he started as a support teacher and basketball coach. When he started he did not finish his bachelor’s but he was determined to finish his degree for himself and to show the students that he inspires daily! I am a former colleague of Coach Kevin Williams and I am a better educator, student advocate, and person because of working with him!

Kathy Gilbert Posted over a year ago

I am glad to hear Coach was nominated for Lifechanger of the Year since he is such an indispensable part of many of his students’ lives. Coach does so much for so many, it’s time he is properly recognized. Congratulations Coach—MS/HS would have a completely different vibe without you!

Courtney Summer Posted over a year ago

223 would not be the same without Coach. He has changed countless young lives for the better, and we are so lucky to have him on our team. We love you, Coach!