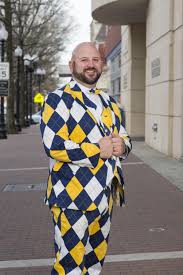 Vernon Spruill was nominated by his colleague, Rhonda Hill.

Mr. Spruill has inspired the Cape Fear Colts' Nation as he lives by his own hashtag, #coltprideneverstops. He's the youngest principal in the history of his district, and many people were waiting and watching to see how he would do his first year.

In the first few months on the job, there was a school shooting, and Mr. Spruill's quick actions kept students and staff safe until the shooter was found. This was the first heroic act that won his community's hearts and respect forever. Several years have passed, and Principal Spruill continues to touch the lives of students  through his actions and daily efforts to make a difference.

He started Colts for Kids, a program that reaches out to elementary and middle school students in his district to help provide them with $5,000 of presents for Christmas. He takes the high school students shopping, and they purchase presents with donated funds for selected students from every elementary school and middle school in his district. This has been a giving and caring tradition that he started.

Mr. Spruill not only wants academic success, but lots of school spirit. He leads the crowds at ballgames and state playoff games. The school goes crazy when Principal Spruill walks into the games; they love his COLT Nation suits. He always knows what to wear! He lives his life in a way where he can provide the best for his students and community.

This past year, Principal Spruill has shown his strength, modeled an undefeatable attitude, and has let nothing bring him down. He has gone through heart surgeries and returned to work in October. He kept in touch with his staff and students through texts, phone calls, and brief videos. Mr. Spruill continued to promote his school, even through the toughest times of his life.

"We love Principal Spruill and are happy to see him back helping students, staff and our community. He's our friend, neighbor, and awesome principal who has shown us time and time again his #coltprideneverstops!"

CHARLOTTE SHAW Posted over a year ago

Mr. Spruill strives to great the best learning enviroment for all students.

Tracy Autry Posted over a year ago

Mr. Spruill is an awesome principal. I have five children, and four of them either attend or graduated from Cape Fear High School. I am so proud of the way the school has grown under his direction. He truly has a heart for children....not only the ones who are students here at Cape Fear, but also those who attend the elementary schools that are in the Cape Fear district. This year I started working at Cape Fear, and it truly touched my heart when listening to the morning announcements that he tells the students that if nobody has told them they loved them today, that they are loved here at Cape Fear High School. And that is the truth. He loves these students and his staff. I am proud to work for Mr. Spruill. I am also so very thankful that my children have been able to attend Cape Fear High School under his leadership.

Kasie Clevidence Posted over a year ago

Wonderful Principal! Everyone loves Mr. Spruill:) Thank you for being so involved with our children and making it fun along the way. Got my vote;)

Sara Piland Posted over a year ago

Lee's godliness, love of people, zest for life, creative abilities, and desire to inspire the best in others make him a definite Lifechanger. Lee's code for living is Jeremiah 29:11 "For I know the plans I have for you,” declares the LORD, “plans to prosper you and not to harm you, plans to give you hope and a future." Lee has placed his life in God's hands and we see God's love in him each and every day as he changes the lives of his students, staff and all who know him.

Terry Keith Posted over a year ago

Lee is a GREAT Leader. He leads by example and has ALOT of fun in the process. Definitely a Life Changer

Michelle Johnson Posted over a year ago

I work with Mr. Spruill and can say, without a doubt , there is no one more deserving of this! He loves Cape Fear High School and its community more than anyone ever could! He bleeds blue and gold! The following hashtags are because of him #coltprideneverstops #staffulty #imacoltandproudtobe ??????

Crystal Page Posted over a year ago

Mr. Spruill has been such a positive role model for the students at CFHS! He is the prime example of the type of leader all schools need. I am a graduate of 2008 from CFHS and I have to say watching how much the school has grown since Mr. Spruill has entered is incredible! Cape Fear High School is the BEST place to be! Colt Pride Never Stops! Huge thanks to Mr. Spruill for all he does for CFHS as well as the surrounding community! Cape Fear is a better place because of you!

Melinda and Wallace Frazee Posted over a year ago

Lee Spruill has been a wonderful leader for our high school! Cape Fear is the only high school on the east side of the Cape Fear River in Cumberland County; and as such, covers a wide area as it’s district, mostly rural. Even still, Colt Nation is a community like no other; and that is, in large part, due to Lee’s leadership. He is Cape Fear’s biggest cheerleader and a wonderful role model for our students. As two CF alumni (class of 76 & 77), we are proud and happy to have Lee Spruill at the helm of our alma mater!