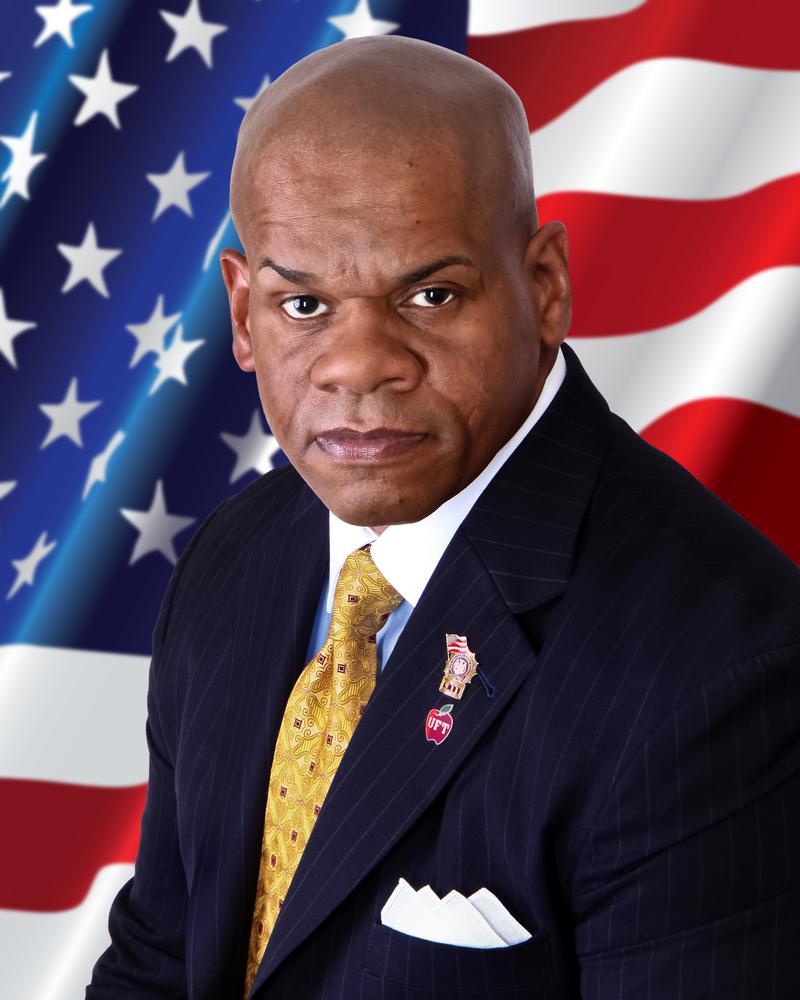 Alexander Bell was nominated by his mentee, Meagan Ramsawak, who is currently a Success Via Apprenticeship (SVA) candidate working for the NYC Department of Education. At the ripe age of 22, she has already taught in three different schools in Queens and Brooklyn, and has worked in the IT industry for two years. She is also making a teacher’s salary, along with benefits. This is all possible because of Mr. Bell.

"Today, as a fourth year SVA candidate, I am now currently working directly with Mr. Bell as my mentor after having him as my high school shop teacher four years ago," said Ramsawak. "Mr. Bell nominated me for the SVA Program, and now I am on my way to becoming a Career & Technical Educator! Mr. Bell is actually one of the SVA candidates from the very first SVA cohort. It has been 37 years and counting since then, and his level of consistency in impacting students is remarkable."

The success that comes out of Room 111 at Thomas Edison CTE High School is like no other. Mr. Bell has successfully found a way to make a positive impact on his students every day over the past 37 years. The students that graduate from his program can attest to that. Mr. Bell has been getting students certified in A+ Computer Repair each year for the past couple decades. Students leave his room A+ certified and get jobs at stores like Best Buy, where they realize they are often the only employees who are A+ certified!

Mr. Bell has been working with CompTIA for years certifying his students, and CompTIA is globally recognized! There are individuals who pay to get training from CompTIA and pay to take the exam. Meanwhile, students coming out of Mr. Bell’s class are getting more than just content training, but well-rounded training and leadership training! In addition, they are receiving vouchers to take the exam. Students are not only leaving Room 111 as certified technicians; they leave this room as leaders. Whether they decide to take on the technology world or branch off into something else, they will always have leadership.

"As a student, I was exposed to a whole new level of technical work. Mr. Bell taught us more than just the technical aspect of the IT world; he taught us professionalism, responsibility, and most of all, accountability for our actions. As a student, I did well and followed Mr. Bell’s lead to become a young leader, and am now on my way to becoming a young CTE educator. However, working with him as my mentor this year has opened my eyes to so much more. Mr. Bell genuinely cares for his students, and I felt this as a student. Through working with him, however, I see all the effort and time he takes in managing his classroom and ensuring his students get the best possible outcome at the end of the day."

"We have had so many people come to his room to visit him from over 10 years ago to thank him and tell him how much he’s changed their lives," said Ramsawak. "I have asked them to speak in my class, so that their journey can impact the current students and encourage them to stay focused and follow Mr. Bell’s lead into becoming a young leader. It was amazing to me that so many students dating back to so long ago return to Mr. Bell’s classroom just to greet him and thank him. He has shared emails where many previous students have reached out to him, whether it is for advice, for holidays, or just to catch up. It truly is amazing to me the impact he has had on so much youth. I knew I was impacted as his student, but I never saw how much he impacts all his students. This has motivated me every single day to be better, and he sets an example of the kind of educator I want to be. Everything Mr. Bell does, he does for the benefit of his students, and that is a beautiful thing."

Currently, Mr. Bell stands as a NYC CTE Teacher, a CTE Representative, a NYSUT/AFT Delegate, Mouse Squad advisor, NTHS Advisor and National Board Member, and a certified technician in A+ Computer Repair and Networking +. He’s very well involved and ensures that he spends his time “standing up and speaking out.” Mr. Bell is a natural born advocate. He stands up for what is right, and he makes sure his students are treated with respect in the school building.

"As a former student, this is the most amazing feeling; to know someone is looking out for you and supporting you," said Ramsawak. "It made me feel safe, and it still does as his SVA candidate, to know that I can continue to progress in my class and stand up for what I believe in and feel secure and confident in doing so."

Mouse Squad is an in- house service where students get the opportunity to exercise their skills by resolving technical issues within the school building. As the advisor and one of the people who brought Mouse Squad into the school building, Mr. Bell takes time to ensure his squad members are treated fairly and advocated for. Not only do the students get an idea of how to apply the work they learned in their shop class, but they also learned how to interact with different kinds of “users” and resolve their issues while remaining professional.

"The experience I gained while working on Mouse Squad as a high school student and being a student in Mr. Bell’s class, helped me excel when I worked in the IT Department at Queens Hospital Center for two years," said Ramsawak. "Without training in Mr. Bell’s room, I don’t think I would have been able to excel and progress the way I did in the industry."

"When I was in high school, it was the first full year of NTHS, and we started with less than 40 members. Now NTHS has grown so much under the advisement of Mr. Bell," said Ramsawak. "With an organization like NTHS, Mr. Bell gains the opportunity to impact students who are not in his class with the use of powerful events, such as the Women's March 2018. This is just another one of the many ways Mr. Bell continues to guide the youth of today and shape them into young leaders."

"I have never met or had any other teacher who best fits the title of LifeChanger like Mr. Bell," Ramsawak concluded. "Mr. Bell is not just a teacher; he is an educator, he is an advocate for his students, and he is a leader. He deserves to be recognized for all the hard work he does day in and out for his students. Success is the only thing that I’ve seen come out of room 111. I’ve never seen such compassion for the classroom before, and I can only hope to be at least half as good an educator as Mr. Bell, because even half would be more than enough."