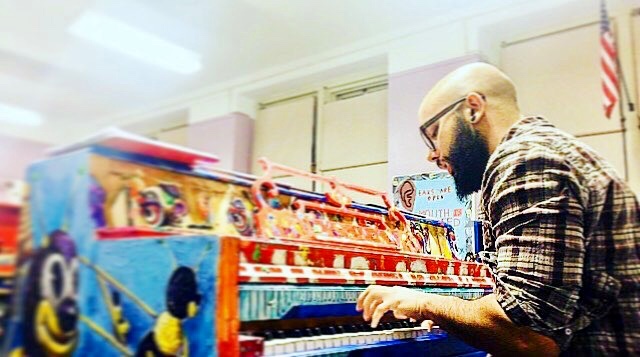 Ryan Mack was nominated by an anonymous family member.

P.S. 52K Sheepshead Bay is a Title 1 school in Brooklyn, N.Y. with a student body of almost 900.  Over the past five years, the school’s Music Educator and Ensemble Director, Mr. Ryan W. Mack, has established a program that excites and engages students of all ages, levels, and abilities through music.  What was once a basic vocal general music program, has now expanded to include three different choruses and a musical theatre program.  Along with creating opportunities to explore vocal music, Mr. Mack has also petitioned for and sought out the funds and resources to create programs in instrumental music, with studies now available in string orchestra, modern band, and piano/keyboard.

Mr. Mack not only takes great pride in his Music Program, but works tirelessly to make it available to all students who have an interest in exploring the musical arts.  Prior to Mr. Mack coming to P.S. 52, there was a small violin program available.  However, this program was offered exclusively to students that were enrolled in the school’s Gifted & Talented curriculum track.  While he loves the idea of providing unique challenges for these students, Mr. Mack felt that the joys of music should be made available to all interested students, regardless of academic level or background.  Through his efforts, he managed to secure more than $100,000 in new instruments and instrument accessories, including 22 violins, 8 violas, 6 cellos, 19 keyboards, 10 guitars, 1 one-of-a-kind Sing for Hope piano, and 1 drum kit.  All of this was through his own personal ambition, and is provided at zero cost to the school and students.

His program is further supplemented with various partnerships, residency programs, grants, and field trips, including the VH1 Save the Music Instrument Grant, Midori & Friends’ 12-Notes program, Disney Musicals in Schools’ Mini-Residency, CASA grants, Carnegie Hall’s Ensemble Connect School Partnership, Link-Up, and Musical Explorers programs, Sing for Hope, Jazz at Lincoln Center’s Jazz for Young People program, the New York Philharmonic’s Young People’s Concerts for Schools program, WE Day, and Little Kids Rock.  Many of these programs have included field trips to top concert halls and theaters in New York City, including Carnegie Hall, David Geffen Hall, the Rose Theater, the Circle in the Square Theatre, the New Amsterdam Theatre, the Gerald Schoenfeld Theatre, the New Victory Theatre, and the Minskoff Theatre.  Through the work that he does, students in Pre-K to 5th grade have experienced more live music in professional settings than many adults have in their entire lifetimes.

In addition to concerts and performances experienced as audience members, Mr. Mack puts on several productions throughout the school year.  On top of being of an incredibly high caliber, with students singing in 2, 3, 4, and even 5-part harmony, the material presented is carefully selected to reflect the interests, values, and cultures that make up the school.  Students have performed songs in Russian, Arabic, Italian, Portuguese, Spanish, Haitian Creole, Greek, Hindi Georgian, as well as traditional songs from Ireland, the Chocktaw and Cherokee tribes, Brazil, Argentina, South Africa, Puerto Rico, Mali, and North America.  Classes and rehearsals centered on these songs are structured so that students can embrace and learn to understand and appreciate the cultures at hand, as opposed to simply learning a song and moving on.

His work not only reaches his students but the surrounding community as well.  He is an NYC Men Teach Mentor, providing guidance and mentorship for new NYC DOE educators, as well as an Arts Monday Facilitator for the Office of Arts and Special Projects, in which he facilitates monthly workshops on music education and assessment.   His community engagements and collaborations with the Downtown Brooklyn Neighborhood Alliance and the Bay Improvement Group have provided a way for his students to give back to the surrounding community even more, with featured performances at local charity toy drives and other community events.  Additional community engagements have included a performance at the 2017 Brooklyn Borough Arts Festival, a Gold Medal at the 2018 NYSSMA Festival, and most recently a performance at NYC DOE Chancellor Richard Carranza’s Winter Party.

"What sets Mr. Mack apart is the tremendous amount of love that he holds for the Music Program, as well as for his students," the nominator said. "He relentlessly pursues additional studies and workshops in music education to be whatever his students need.  His passion for the work that he does is contagious, and his enthusiasm, as well as his ambition to educate, elevate, and inspire makes his classes a joyful and invigorating time.  He has a persistent drive that inspires his students on a deeper level, awakening within them an inner greatness not yet encountered."

Above all, students love coming to music class, and are continuously motivated to invest further in their education. Lessons are rigorous and challenging yet always promote fun and play, as the classroom is filled with life, learning, and especially laughter.  The families of his students recognize the profound and positive impact that he has had on their children, as he constantly tries to find new and innovative ways of reaching students through music.  The endless creativity that he pours into every moment has created an incredible shift over the years, as his students familiarize themselves with a new means of artistic and intellectual expression.  They have become true scholars of music; independent artists with their own creativity and interpretations, and a sense of camaraderie, as well as an understanding of how to collaborate effectively as an ensemble.  His students recognize that they are a team, and that along with their ability to express music eloquently, they must also strive to support one another as a community.  This is what turns the casual student into a self-sustaining, life-long learner.  This is the moment when you know that the music will continue on long after the concert has ended.  This is why Mr. Mack is a phenomenal educator and an artist of learning.  He is a role model and an inspiration, gifted at sparking young minds.  He is a true LifeChanger.