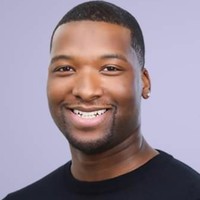 The special connection that Mr. Gilchrist shares with his middle school students at KIPP’s AIM Academy is due in large part to his own upbringing. He grew up in one of the tougher sections of Suffolk, Virginia, where children often wrangled with adult-sized problems. For these children, issues at home made it difficult for them to focus on schools.

Mr. Gilchrist's students know something about this life, too. They are from the more economically challenged Wards 7 and 8 in the southeast quadrant of Washington, D.C. – two of the predominantly black sections of the city. Mr. Gilchrist understands that a student’s incomplete homework or frustration in class sometimes has less to do with what’s happening in the classroom than what’s happening outside of it.

“I knew I wanted to teach students whose backgrounds look a lot like mine,” Gilchrist said. “I’m able to build relationships with them and their parents because our stories are the same.”

Growing up, Mr. Gilchrist always knew he wanted to work with kids. For as far back as he can remember, teachers would tell him his charisma, intelligence, and way of communicating had all the markings of an educator. He went off to college with hopes on helping children who’d gotten tangled up in the criminal justice system, but he left after a couple rocky years to pursue a career in restaurant management, followed by another in real estate. And yet, he just couldn’t shake the calling to teach.

One morning, after several years away from college, he decided to quit his job and re-enroll in school – this time pursuing a degree in elementary education. It wasn’t long before he knew he’d made the right call. Working as a dedicated aide in a third grade class in Southeast D.C., he met a student whose father had just died.

“My brother and I lost our father at a young age, too,” Gilchrist said. “My younger brother was about the same age as the student when it happened. I recognized some of the same signs and immediately knew what to do.”

The shared life experience helped Mr. Gilchrist support this student through their crisis and confirmed he was exactly where he was supposed to be.

There is a word that comes up repeatedly among Mr. Gilchrist and his students: accountability. They are all aware of the stereotypes about black kids from Southeast D.C. Some believe these students lack the discipline and work ethic to excel in math. Others question their commitment to education, but Mr. G and his students know better. Mr. Gilchrist’s mother always stressed the importance of education to him, and it’s a message that fills his classroom. They know if they want to be the best, they all must be 100%.

“In this room, we’re a family,” Gilchrist said. “At home, you have struggles. At home, you laugh, and you have fun sometimes. We’re going to do all of those things in my classroom, and on top of all that, we’re going to master the content and learn lessons as well.”

The lessons about life are sometimes more important than the ones about math. As a black male teacher, Mr. Gilchrist wants to ensure his students, nearly all of whom are black, will learn from his mistakes

Only 2% of teachers in the United States are black men. His students are especially glad they're able to learn about math and life from one. In addition to being their math teacher, Mr. Gilchrist is also their mentor. Many students can cite instances when they were getting mixed up with the wrong crowd or responding to stress with anger as adolescents sometimes do, and Mr. Gilchrist was there to talk to them about brotherhood, being respectful young men, and remind them of their mantra: 100%.

Mr. Gilchrist chose to teach middle school for this very reason: he believes it’s a crucial time in these students’ lives.

Parents are fans of his, too. When he holds after-school tutoring sessions, he invites them to attend, and they often outnumber the students.

“Sometimes, the hurdle for parents in checking their child’s homework is that they don’t remember the material from so long ago, or they aren’t sure what to check for,” Mr. Gilchrist says. “The tutoring sessions give them confidence to engage their student and reinforces the fact that it takes all of us to help our children be successful.”

Mr. Gilchrist is one of those teachers who understands teaching the subject isn’t what’s important, it’s the life lessons the kids learn from the subject that is important.

The Walker’s Posted over a year ago

Kean Ray Posted over a year ago

Congrats! Continue to do amazing work brother! Your star is shining bright!

Michael Somerville Posted over a year ago

Mr G! Your one of the most hardworking teachers I know. The way you helped tutor my niece with High School Algebra for free was beyond approach! In a few days you did what 3 years of high school didn’t. You made Algebra fun, exciting and relatable. All as a favor for a friend! You definitely has a desire and passion to share knowledge and teach our youth for “Be Great”! Thank you!

Neclos Posted over a year ago

My favorite teacher is Mr. Gilchrist but we just call him Mr. G. Mr. G is my math teacher and he is the best teacher. Mr. G personality helps me get through tough times. Also, while we are in math class we don't just learn, we have fun. Mr. G can make something boring fun. His personality is a one of a kind. One time when I wasn't acting like myself like following the wrong people, Mr. G encouraged me to always be myself. He also pushed me to join the National Junior Honor Society. He is my mom's favorite teacher and if he taught you he'd be yours too lol. Mr. G is my favorite teacher because he influences me not only to be a great mathematician but a better man in life. He gives us pep talks and speeches on life. In class, he teaches us the easiest way to do the lesson. If I have a A-, Mr. G will tell me what should I do to get an A+. Go check out the Instagram page @mathwithmr.g. Good Job Mr. G

Kenneth Hutchins Posted over a year ago

Congrats Mike! You passion and dedication to helping the youth “Be great” is beyond comprehension! Thanks for much for helping model and shape the future of tomorrow!

Monica Gilchrist Posted over a year ago

T. Gaskins Posted over a year ago

Mr. G is amazing! He has truly been a life changer in the lives of many kids in our community. His dedication to seeing our kids and community succeed is unmatched. His impact goes way beyond the classroom. My child isn't always the biggest fan of math but loves Mr. G and his class because of how he relates every experience to real life. He is also a PARENT'S TEACHER. It is mandatory that the adults are involved when their kids are in his class. He keeps his phone on all the time to make sure we can be involved and get updates at a time that doesn't impact the other things have to take care of like working and trying to go to school ourselves. I have scheduled several calls with him after 9 pm and he hasn't missed a single one. He motivates me to do better for my daughter. I hate math too but I have even found myself asking Mr. G for help and he has never turned me down. What teacher do you know holds tutoring for parents. Congratulations Mr. Gilchrist onj your nomination.

Rhonda Posted over a year ago

Mr Gilchrest deserves this award! Wish we had more young man like him

Taiwan Walker Posted over a year ago

Congratulations son....from the day when i got off work years back, I think you were about 13. You were sitting at the computer, and I said to you...Son why are you always in the house? Why you not out enjoying kid life. You looked at me and said that some of your friends were doing some things that you didn't do and you didn't want to be categorize as doing the same as them. I knew then you were destined for greatness...for a child to recognize that....I knew you were different. You deserve this award....I love you man. Salute!!

John Rice Posted over a year ago

Congratulations young man continue doing your best.It's in your blood to be great because you you come from a great family.May God bless you.

Chris Cross Posted over a year ago

Love what you doing with theses kids bro!!! I wished it was more guys out here with the drive and dedication you. KEEP IT UP !!!!!!

Tavon Walker Posted over a year ago

Hey, bro. I’m so proud of you. You have always been someone that I have looked up to.

Bruce Posted over a year ago

ERICA BRANCH BAKER Posted over a year ago

Congratulation!! We are so proud of you . Keep looking forward. You are doing big things

Melissa Lee Posted over a year ago

Congratulations to my amazing loving nephew. I am proud of you but not surprised to give love come easy for you to do because you were raised with love. You have always been smart and intelligent growing up. Just know your father in Heaven Looking Down On You Are Very Proud And Your Supportive Mother As Well. To nominate Mr. Gilchrist was an awesome decision you will not be disappointed I love you. Blessings!

Michelle Gilchrist Posted over a year ago

I'm extremely proud of you! It's individuals such as yourself who makes a difference in our youth. Keep pressing forward.

Tony D Posted over a year ago

Congratulations Michael! Growing up everyone always said you'd be a great teacher lol. It's good to know that you responded to your calling and are impacting so many lives. I still look up to you bro. Keep it up man.