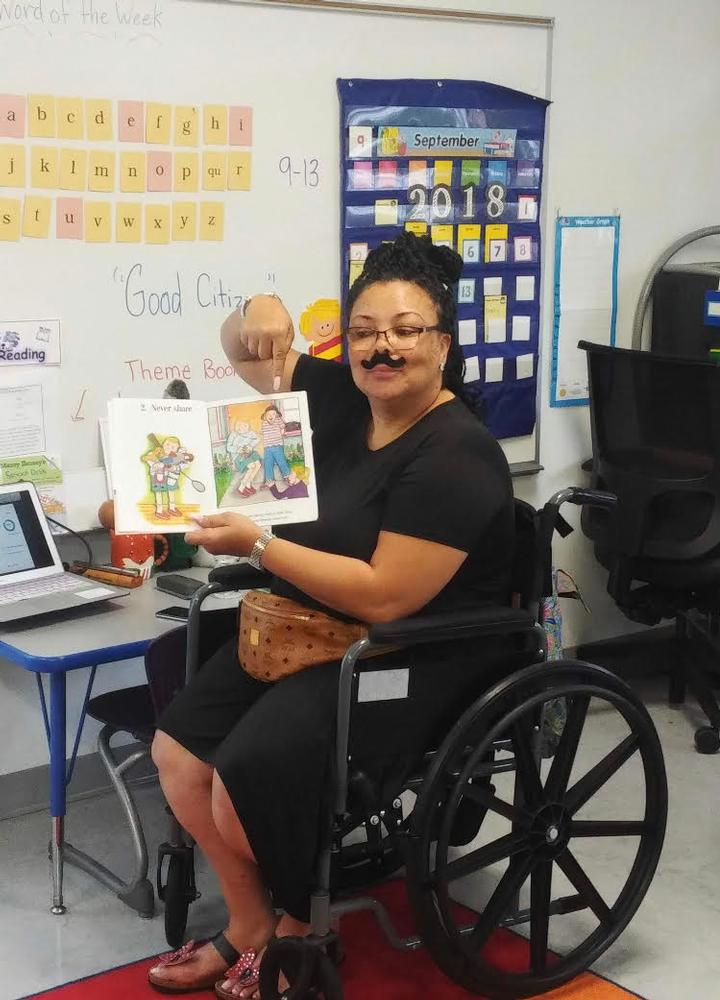 Marion Fox was nominated by her spouse, Malcolm Fox.

In 1988, Mrs. Fox started her path as a nurturer by serving as a “Volunteer Hug Mother” at DC General Hospital. The babies she bonded with while working as a Hug Mother were children who were left behind in the hospital or suffered from the result of their parent's drug use while they were being carried. The time Mrs. Fox spent holding these babies gave them the love they were missing until a family member came to get them or they were placed by Child and Family. At the time, Mrs. Fox was developing her gift of unconditional love for children.

In October 1989, as a single mother of three, Mrs. Fox was hired by DC Public Schools as a Teacher's Assistant. In addition to caring for three children on her own, she continued to pursue her education in spite of many challenges and completed her Bachelor of Arts in Education from The University of the District of Columbia and at Trinity College. In 2008, Mrs. Fox earned a Masters of Education from George Mason University

Mrs. Fox's interest in Special Education stemmed from her own difficulties in learning throughout elementary and high school. She knew of her intelligence, but she couldn’t figure out why she has such an issue with retention and following the class lectures. She has been quoted several times as saying," I never want any child who may have a different way of learning to be perceived as a child who has an inability to learn." Although school was difficult at times, she kept pressing on, changing study habits until she perfected them. It wasn't until Mrs. Fox's 12th grade year when she would finally meet an educator patient enough to see her difference and adapt to her learning style. She also sent Mrs. Fox to a center where she was diagnosed as dyslexic.

"I will never forget the understanding and belief that Dr. Carter showed me in the 12th grade," said Mrs. Fox. "She allowed me to take one of my English exams orally, and I amazed myself by passing my exam with ease. Dr. Carter, however, knew I could do it. She saw I learned differently than others."

This life lesson is the driving force behind Mrs. Fox's many success stories with her own students today. The Early Childhood foundation she has instilled in thousands of children has made her one of the most beloved childhood educators in the entire DC public school system.

While blazing her own path throughout her career, Mrs. Fox has also brought relationships to DCPS that have lasted for almost a decade. Some of the partnerships Mrs. Fox developed through her proposal writing are from the likes of Apple, Aver Media, Imani Computer Consulting and PFA. In addition to partnerships with these companies, Mrs. Fox has created several Community Builder Activities, which include:

Mrs. Fox is a consistent, reliable educator. On various occasions, she has put her children and their families before herself by giving her off duty time to attend recitals, weddings, hospitals, birthday parties, homework help, and GED assistance.

"I cannot list everything Marion has done. I can only say that she has been a LifeChanger in the lives of so many," said Mr. Fox. "Many of her former student’s parents reach back out to her to discuss the success of their child. They often attribute Mrs. Fox as a great root builder. She is our LifeChanger for life!"

You are the best teacher in Dc.

My child is a student in Mrs. Fox’s kindergarten class. I have been so impressed as to how she has handled his special needs, being proactive and recognizing when he needs extra supports and accommodations to enable him to learn and be successful with his peers. I’m thankful that he has a talented, thoughtful teacher to help him through his challenges. Kindergarten is a big change for these kids and she keeps it fun and engaging so they have a solid academic foundation, preparing them to be future life changers!

Ms. Fox is famous at my house! My kids absolutely relish her attention. Her natural warmth, caring, and attention to each child as an individual is astonishing. She is like a well of good that never seems to run dry— she is constantly giving of herself to her students. Beyond this, Ms. Fox has done more for my kids understanding of inclusion than anyone I can think of - she is boldly inclusive, and quietly insistent of equal opportunities for people of all abilities. We love her.

Her love for children inspires me. As a educator myself, she is constantly showing me ways to meet my students needs. Observing Mrs. Fox in action is fascinating. She makes sure every kid feels loved and academically challenged. I’ve witnessed how she has transformed the lives of so many children.

Love working with Ms. Fox! She always has the best interests of her students above everything else.

She is truly amazing.

Mrs. Marion Fox is one who champions the causes of children unanimously at all times. She extends great care and concern for her students, tracking them throughout their entire educational years from Early Childhood to High school. One could not be pretentious to exhibit the motherly concern as well as being an Education that Mrs. Fox exhibits on a daily basis. For this reason, it is her passion that allows her to continually champion the causes of children at all times.

Ms. Fox changes children's lives everyday. She creates such a wonderful learning environment for her class. I am amazed every day at her ability to make each child feel loved and special, as though they are the most important student in the world. She is an endless font of enthusiasm, personalized attention, and encouragement for children at all levels of ability. She uses her own resources to ensure the kids have everything they need- from books that interest them to snacks to classroom furniture and accessories. She is creative in her solutions to support the community, and she is a living example of someone who never tires of giving. Every child she teaches will be shaped for the rest of their lives by her early influence on them.