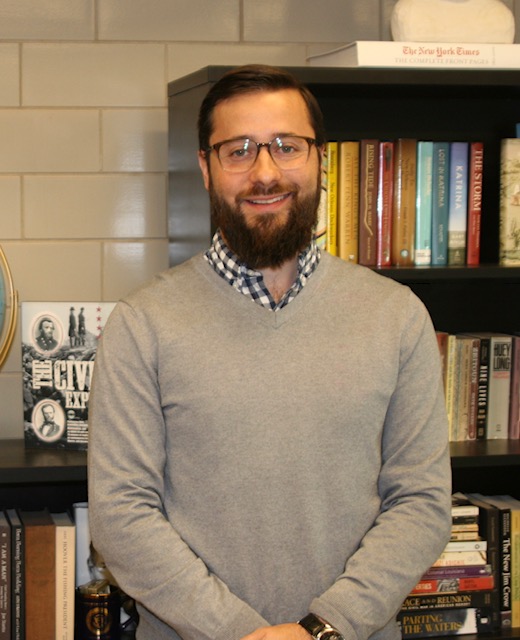 Chris Dier was nominated by Joni Lacy, manager of Louisiana's State Teacher of the Year Program.

Mr. Dier became a teacher to follow the legacy of his mother, a lifelong teacher. As a teenager, he was uprooted to Texas by Hurricane Katrina, where he finished high school and attended East Texas Baptist University (ETBU). At ETBU, Mr. Dier received a Bachelor of Arts in History. Following his graduation, he returned to his home parish in Louisiana to teach. While teaching, he obtained a Master of Arts in Teaching and a Master of Arts in Educational Administration from the University of New Orleans.

Mr. Dier has been teaching for roughly ten years. He currently teaches world history and AP human geography at Chalmette High School. He was voted the St. Bernard Parish District-Wide Teacher of the Year twice and was recently named the Louisiana State Teacher of the Year. Mr. Dier is dedicated to providing an equitable and multicultural education to all students. He engages students by bringing aspects of their identity and culture to the forefront of their education. He was featured in numerous publications and outlets for his work in the classroom and the community, most notably The Washington Post, The New York Times, and the Canadian Broadcast Corporation.

Mr. Dier was a Hollyhock Fellow at Stanford University, a program that brings educators together to create more inclusive classrooms. At Stanford, he developed an equity project with the purpose of legitimizing student language. He now participates in a professional development program at Harvard Business School. Lastly, Mr. Dier authored “The 1868 St. Bernard Parish Massacre: Blood in the Cane Fields,” published by the History Press.

"I teach to reach hearts and inspire students to enact change in their own lives, in their community, and globally," said Dier. "My goal is not just to teach content, but to empower students and give them the framework to use their voices for positive change. In particular, students with identities that exist on the margins of dominant narratives must be made visible and celebrated to ensure that all voices are magnified and everyone’s potential realized. I’m devoted to making students visible regardless of race, class, citizenship status, religion, sexual orientation, gender expression, or any other identifying factor historically used to disenfranchise. Equitable classrooms centered on justice touches hearts, thus inspiring all students to pursue their ambitions."

"I use my voice in revolutionary ways to build equity," Dier continued. "I use my privilege to remove barriers so that all students will flourish like they were always meant to. As an ally who is passionate in my craft, I inspire students to achieve excellence and to be lifelong advocates of positive change."