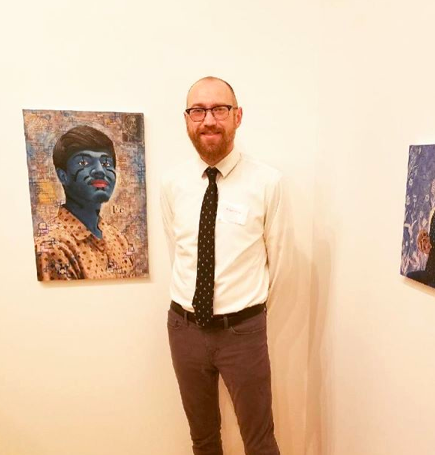 Brian Payne was nominated by Kim Payne, a family member.

Anyone who has ever met Mr. Payne knows he has been changing lives one way or another his entire life. His work ethic, selfless nature, determination to make a difference, and desire to experience life beyond the comfort and familiarity of the small university town where he grew up is a testament of his ability to impact others in a positive way.

As an art educator, he has a passion for teaching art and its importance in history and culture, as well as helping students hone their techniques while allowing them to freely express themselves. This is further proof of his dedication and understanding of the emotional needs of his secondary school students.

Currently, Mr. Payne teaches Art I and Art III, as well as AP Art History. When schedules demand, he teaches Art II, Art IV, AP Studio Art, Art Internship I, and Ceramics. He developed the latter three classes along with AP Art History at Yukon High School, where he has taught for the past 10 years.

Mr. Payne also serves as head of the visual arts department and is the National Art Honor Society sponsor at Yukon High School. He is an executive board member of the Oklahoma Arts Council and a member of the National Art Education Association. Additionally, for the past three years, he has spent the beginning of each summer traveling to Utah to help score high school AP art history final exams.

Several years ago, he created an end-of-the-year "art extravaganza" to showcase students' artwork. Not only do students gain skills by helping with the massive evening event, but they gain confidence showing their art in public, retaining 100% of the proceeds of any art they sell. The extravaganza continues to grow each year, with guest art educators from local universities as well as local artists serving as judges and awarding best-of-show winners.

Mr. Payne's commitments and accomplishments include serving on the 2013 committee to rewrite the Oklahoma Academic Visual Art Standards for the Oklahoma State Department of Education. He was chosen as the 2014 Yukon High School Teacher of the Year, is a recipient of the 2014 Oklahoma Superintendent's Awards for Arts Excellence, is the 2015 Oklahoma Secondary Art Educator of the Year. In 2018, he was one of only three art educators nationwide to be accepted into the prestigious Golden Art Residency Program in New York, sponsored by the Sam and Adele Golden Foundation, Golden Artist Colors, and Scholastic Art and Writing Awards program. Educators are eligible to apply for the competitive residency program based upon their own artwork and certain art achievements of their students. The two-week residency is designed to advance the skills of its educator-participants.

Mr. Payne's essay, "The Chicago Experience: Transforming Identity" was published in the anthology, A Journey to Learn and Unlearn in Multicultural Education (2009). He was also published in the Journal of Art Education (2010). His article brought awareness to discriminating speech often used by secondary school students at the time, which has declined as students become more enlightened and tolerant of gender and intellectual diversity.

Mr. Payne continues to mentor and encourage his students to enter art and scholarship programs. Several of his students have won prestigious awards and had their artwork featured at the state and national levels. He continues to model the importance of practice and perseverance for his students by continuing to hone his own craft. He has had his artwork exhibited in studios in Oklahoma City and New York City, and he also creates commissioned pieces.

Mr. Payne received his BFA with an emphasis in photography from Loyola University in Chicago, where he also tutored inner-city middle school students in math and reading. He returned to the town where he grew up, giving back to his community by coaching little league baseball while working toward his M.Ed from Oklahoma State University. He completed his internship at Lakenheath Air Force Base in England in both elementary and secondary art. While abroad, he traveled to numerous museums, birthplaces, and gravestones of some of the most important and influential artists in history.

This is a part of the passion and lessons he passes along to his students: be respectful, be tolerant, be open to others' ideas, and go out and see the world through different lenses.

Mr. Payne is an outstanding educator whose passion for art infiltrates his instruction each day at Yukon High School. He is a creative and caring educator who encourages students to strive for excellence in their work. He provides his students with creative opportunities to interact with art professionals to gain invaluable skills with various types of medium. Mr. Payne is a collaborative, team player who strives to develop growth opportunities for all students he encounters. YHS is lucky to have an educator like Mr. Payne!

I was a former student in Mr. Payne's class for about 4 years and throughout my years in High school I had exceeded my expectations in art because of him and his ways of teaching. I never felt out of place with my art even though it was so different from others. Mr. Payne taught of with professionalism and took each piece of art he received with consideration of each mark, angle, medium, etc. And helped us understand how we could improve and grow. His way of teaching has been the best through my experience with other art teachers and I couldn't be more thankful for having him as a teacher. He treated everyone right and there was never a day I didn't learn something. I definitely think he deserves this award.

As a former student in Mr. Payne’s class he truly did make a impact on my life. He pushed you just enough outside of your comfort zone and really showed you what you are capable of doing. After I graduated I went on to Duncan brother school of hair design. Many of the things I learned in Mr. Payne’s class applied in my color theory class at school. I’m forever thankful for our paths being crossed and I know he is very deserving of this award.

Brian Payne is a passionate instructor that shares his craft with enthusiasm. He infuses his love of art into all he does: teaching art classes all while encouraging a desire to continue learning and empowering students to make an impact. He would be extremely deserving of this recognition.

Mr. Payne is the biggest advocate for his students. Throughout my time in his classes he continued to challenge us with meaningful projects and encouraged us to be passionate and confident in our work. I’m extra thankful for his help on several college and scholarship applications. His belief and confidence in his students should not go unnoticed.

As Brian's mom I'm probably biased, but master educators like Brian deserve to be recognized. Two things in particular speak volumes about his integrity, professionalism, and commitment to his students and the arts. The first, in 2014, Brian was instrumental in exposing his students and the public to the horrors of Nazi-stolen art during the Holocaust. He started a change.org petition to return Camille Pissarro's painting, "Shepherdess Bringing in the Sheep" to its rightful heirs. The University of Oklahoma, who had possession of the painting, refused, but after a two-year court battle, the painting was returned. (http://returnthepissarro.blogspot.com/2014/05/a-letter-from-leone-meyer-to-david.html) The second is more poignant but speaks to his dedication. Nearly two years ago, he was hospitalized with a collapsed lung. I will never forget the sight of him sitting up in bed, with IV tubes and a chest tube, hunched over writing his lesson plans on his cell phone because he couldn't get internet access for his school lap top. He was uncomfortable but persevered because he knew his students would need the information and structure in the coming days. Six days later, he was back in the classroom.

Brian Payne's willingness to help us by sharing his art expertise, and time with art lessons for our granddaughter, Hannah. Brian should be recognized for his part in encouraging Hannah's talent, self-confidence , and passion for her art. He is not only a gifted artist, but a wonderful teacher.

Mr. Payne’s passion for art and for helping students is evident in everything he does. He is constantly growing his own skills in the arts and teaching methods in order to enrich his classroom.

Brian is SO deserving!! So excited to see this. He has been a passionate person since high school. It's just amazing to see all he's accomplished and it's clear he puts his whole heart and soul into his students and his art. Way to go Brian! Good Luck!!

Our oldest daughter, Halsey, was a student of Mr. Payne’s throughout high school. His impact on her love and appreciation of art has lasted into her young adulthood. His classroom is rich in creativity, support, and encouragement. The environment he provides in his classroom encourages students of all levels to create without fear and to look at life beyond the surface. I can’t think of a more deserving nominee!