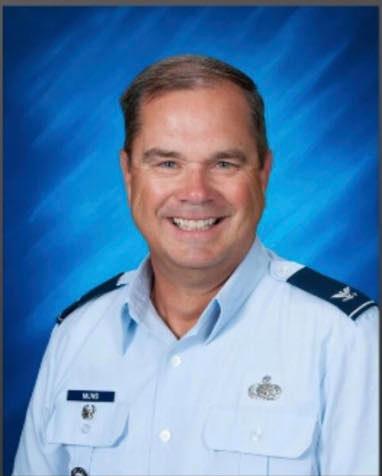 Col. Steve Muhs was nominated by his wife, Meredith Muhs, as well as a student, Marissa Jensen. The following profile contains text from each nomination.

“Tell me and I FORGET

Teach me and I REMEMBER

Involve me and I LEARN.” --Benjamin Franklin

No stronger words could describe Col. Muhs and the way he has integrated himself into his classroom and the students involved in his program. His class incorporates respect, courage, inner strength, and acceptance of others. There are no standards or limitations to the students who enter his program. Instead, there is acceptance, a chance to grow, and an opportunity to find out who you really are by having a “family” that encourages and challenges.

Three days a week, Col Muhs teaches a curriculum that includes flight development, military aerospace policies, and space exploration. Many of his students are on IEPs and often come with a para-educator. Those who need the additional help are not excluded from this program. For the other two days in the week, the students participate in physical training (PT), where they play games such as dodgeball, volleyball and kickball. They also participate in drills, where they have uniform inspection and marching drills. Once again, academic and physical limitations do not define a student. All students are included, regardless of their abilities. This acceptance is what allows the AFJROTC students to feel that sense of pride and belonging that all students should feel.

From the moment he began teaching in this position ten years ago, Col Muhs has taken the stance that no student will be discouraged from participating, no matter their limitations. This has carried over into the program’s participation in various competitions. Instead of holding try-outs for those traveling to compete in PT and Drill/Color Guard Competitions, Col. Muhs allows any student to travel and compete, as long as they consistently attend practices. Has this impacted the scores received over the years? Absolutely! However, the greater impact is had on the students, from those who aren’t academically or athletically talented, to those who don’t feel like they belong to any particular group. To see a student stand a bit taller, make eye contact, and smile; to have that student’s parents sit in the stands and see their child perform in front of others…that is what makes a successful competition.

Inclusion and acceptance are the first steps to fulfilling the Fargo Public Schools mission of educating and empowering all students to succeed. Below are a handful of examples showing how Col. Muhs and the JROTC program have impacted the lives of students and staff.

-There was a student who was always laughing and joking. His social circle was large, and he was the life of the party. What his friends didn’t know, however, was that he had suicidal thoughts. When a friend and fellow classmate found out, they were scared and reached out to trusted adults in the JROTC program. Today, that student is happy, with a successful career and social life. The connections and bonds he made within his JROTC class have made him a success…not a statistic.

-There were two students who were dating and in love. Then, she got pregnant and had a baby just before graduation. Despite the challenges, they continued their education, got married a year later, and had a second child. Today, he owns and runs his own successful company. They continue to support JROTC, attending activities and encouraging current students. They are a success…not a statistic.

-There was a quiet, yet defiant student who struggled to fit in. She came from a broken home, unsure of her self-worth. She struggled with her personal identity. As time went on, she began to smile, opened up to classmates, and made friends. She found the courage to cut her hair and tell her family she was gay. This student found acceptance in a place where everyone can be themselves. She is a success…not a statistic.

~There were two siblings, a brother and sister, who each had a different father. When they were enrolled in the JROTC program, they lived with their mother and a step-father. The step-father was abusive, to the point where one night, the sister called the school not knowing what to do. The trust and security that she and her brother found in the JROTC program allowed them to ask for help. These siblings are on their way to being a success…not a statistic.

-There was a student who was also a refugee, living with various relatives. She loved sports, her friends, and America. She became a citizen, and today, she is a well-respected U.S. Marine. This student returns to tell other students in the JROTC program about her story. She is a success…not a statistic.

-There was a staff member whose father was a Veteran. The JROTC students performed a flag folding ceremony at a Veteran’s Day program honoring his father. Unfortunately, his father passed away soon after. The teacher asked the JROTC students if they would honor his father again at the memorial service. These students were able to see firsthand just how important life is and how they personally made an impact on a person’s life. They are a success…not a statistic.

~During the summer, there was a student who had just finished his freshman year. His parents were divorced, and he had spent 4th of July with his father. He was dropped off at home, and upon entering the house, he found out his mother had passed away. Word spread quickly throughout the JROTC program. Students began calling and messaging each other. This student had only been in JROTC for a year, so he wasn’t well-known, but that didn’t matter. He was one of them, a brother. The students asked if they could attend the funeral and wear their uniforms, which they needed permission to wear outside of JROTC events. Col. Muhs gave his students permission to wear their uniforms as long as they wore them appropriately, as he would be wearing his as well. Together, they attended the service and filled over two rows of the chapel. Afterwards, his mom’s friends and family approached, telling the JROTC students just how much it meant that they showed up. No one asked these students to do this. They knew that a family member, a brother, was hurting and was in need. You see, that’s what families do. You pull together. You forget about the differences, and you support. These kids were able to show, to lead by example, all the lessons they were learning in Col Muhs’ class.

“When I first joined the AFJROTC program, I was skeptical of how it was going to go, since I've never taken a class quite like this,” said Jensen. “Col. Muhs was so welcoming, and he made us feel comfortable with each other. I was very shy upon joining the program, but after being there for three years, I’ve become a confident, trustworthy, selfless person. I am now currently in the US ARMY as an Infantryman who is now a SPC...I am a representative for single soldiers and am now in training to become a resilience trainer, which is the army's version of a counselor.”

“Col. Muhs not only creates future soldiers, but he creates better people,” said Jensen. “He helps build students’ character for the better, and he lets the students become their own leaders, communicate to learn team building skills, and understand that it’s okay to ask for help...He's the best teacher I could've asked for, and I still visit him and the classes when I go home every year.”

“Steve has an open-door policy, which goes beyond the academic curriculum,” said Mrs. Muhs. “His classroom is a safe place where students can be themselves, laugh, cry, accept others, and grow into compassionate citizens and leaders of tomorrow. They are encouraged to lead by example. Sometimes they fight, argue, and disagree, but isn’t that what families do? They disagree, but hopefully, they learn to accept, even within their differences.”

“I can do things you cannot,

you can do things I cannot;

Together we can do great things” –Mother Teresa