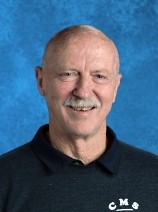 Richard Smith was nominated by his principal, Shawn Varner.

"Mr. Smith is retiring from teaching at the end of this school year after 45 years of teaching, which is quite a feat. This is the fourth school year that I have had the pleasure of serving as Mr. Smith’s principal at Cooley Middle School, where he served as our school’s computer foundations teacher," said Varner. "During this time, I have had many opportunities to observe and evaluate Mr. Smith’s teaching, as well as his inclination for being a positive influence and role model on campus.  It was obvious from my first day on campus that he loved his job and the students.  It was common for Mr. Smith to be involved on campus outside of the classroom, as he ran the snack bar for after school sporting events. He used some of these proceeds to purchase plants for our front office courtyard area.  He also maintained and watered these plants, as we do not have irrigation in this area."

Mr. Smith is a life-long, dedicated educator who is relationship-focused with his students, colleagues, and parents alike.  He has served as the electives department chair for several years, and he is beloved by the Cooley staff.  He is funny, charismatic, and ultimately, an all-around great person.

Mr. Smith is always open and willing to share ideas and plans with his colleagues. It's quite apparent that he has a passion for his students, as well as for teaching and education in general. He uses this to create a positive, supportive community environment.

Mr. Smith is a staple at Cooley Middle School, and he is going to be greatly missed.  He is hard-working, dependable, knowledgeable, and always willing to help others.  He achieves all of this with the ultimate goal of helping students and focusing on what is best for them. Mr. Smith epitomizes what one would expect from a top-notch educator, and he exudes professionalism in every aspect of his job. He relates well with his students, colleagues, and parents, and he exhibits a pleasant, friendly personality on a daily basis.  He has a positive, supportive personality, and he is always willing to help solve problems on any level.

"I wish Mr. Smith the best in his well-deserved retirement after 45 years of teaching," said Varner.

Congratulations Mr. Smith! Thank you for the years of service to our community. Enjoy retirement!