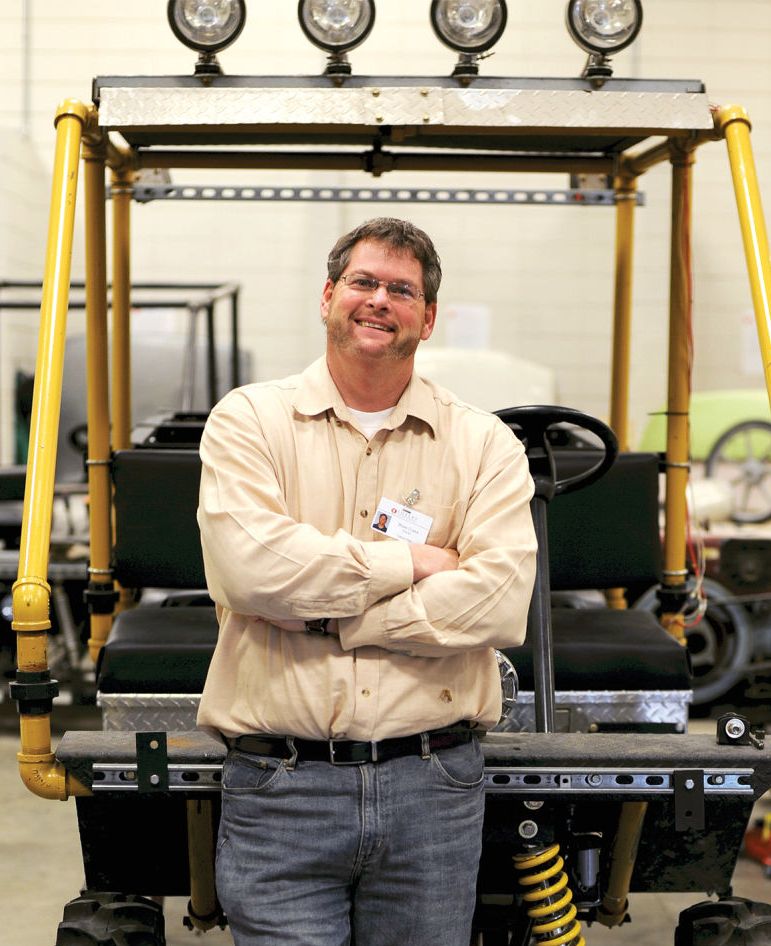 In 2008, when Mr. Copes was a teacher at Calera High School, he taught eighth graders to reach far beyond their perceived ability by building basic utility vehicles capable of transporting goods/services in poorer countries. These students went through an amazing transformation, from struggling students to having a desire and thirst to go to school.

Mr. Copes entered these innovative students into a collegiate engineering competition, where they were the only non-collegiate team. His 8th grade students won first place, beating well known colleges and universities. The vehicles they built are now used in Honduras. The vehicles include an ambulance, a farm vehicle for plowing fields, and a school bus. One was outfitted with a water-well drill that travels from village to village drilling life-giving water.

His students have also developed inexpensive prosthetic legs from automotive parts. The students' prosthetic legs have been refined and are mass producible at $40 each. He has led four teams of students and teachers to the jungles of Honduras, where they have not only delivered the basic utility vehicles, but have fitted twenty amputees with student-created prosthetic legs. In 2014, his students also constructed a hydroelectric power plant to generate electricity for a rural medical clinic.

Recently, Mr. Copes led a group of educators to Honduras to establish a sister school partnership. Education beyond elementary school is unaffordable to the people living in Jutiapa, where wages average $2.50 per day. During the 2013-2014 school year, he raised the necessary funds to add two rooms onto the Cefalu School in Honduras, thus allowing the offering of both middle and high school classes. Currently, 115 students are attending this school. In 2014, he and seven students traveled back to Jutiapa to install solar panels and build a basic utility vehicle that serves as a school bus.

In 2016, Mr. Copes led Information Technology (IT) students from Thompson High School to install computer labs in three different Honduran schools. These labs connected the Jutiapa schools to Alabaster City Schools, where teachers turn on their web cams and share their lessons. The Earth Science students delivered and set up three water chlorinators. These chlorinators treat local water supplies by creating up to 30,000 gallons of safe drinking water per day. Students trained the Jutiapa community how to set up these chlorinators and use them to test their water sources. Health Science Academy students volunteered in a free medical clinic located at the base of the Cloud Forest. These students trained local Hondurans on basic emergency medical care. Many of the activities on this trip were filmed by students for a documentary that shows the students' life changing work.

The Sister School partnership prepares students to live and work in a twenty-first century global workforce. The project further develops students' hard and soft work skills, giving them a better understanding of cultural awareness and diversity. Most importantly, the students discovered a world outside of themselves and that they can change the world.

This summer, Mr. Copes presented his project at the Southern Regional Education Board National Conference, and schools in Oklahoma, New York and Alabama are joining in to each build a container classroom. These containers are going to provide career technical classrooms for a school in Belaire. A welding, woodworking, computer lab, and STEM lab are currently the proposed classrooms.

The innovation and learning that Mr. Copes brings to his instruction is not limited to poorer countries. Other projects include development of inexpensive aquatic wheel chairs for special needs students, developing a side-by-side bicycle that allows a handicapped student to ride beside an adult, and establishing a high tech green energy competition in Alabama known as Electrathon. Forty teams from four states participate in the Alabama Electrathon.

Recently, Mr. Copes was recognized by the Varkley Foundation’s Global Teacher Award as one of the top fifty Teachers in the World. Mr. Copes isn't only a LifeChanger; he is teaching his students and colleagues how to be LifeChangers as well. His nominator states that they are proud to have recruited him and worked with him, but most importantly, they are proud to call him a friend.

"Mr. Copes is the epitome of a LifeChanger who has a true desire to reach students far beyond the walls of his classroom," the nominator said. "His classroom accomplishments are impressive."

Brian Copes In The News:
The education system may be cooked but there’s still fire teachers out there
THS teacher named as LifeChanger of the Year finalist
Alabaster teacher selected as a finalist for LifeChangers Award

I wonder if Mr. Brian could be interested in the island of Haiti as well! That will be great idea to implement over there as well! Congratulations Mr.Brian.I share your passion as well as a teacher but not in engineering area!

As an elementary STEM teacher, I dream of having such a great impact on my students as you do! You are truly a LifeChanger in my eyes!

Becky Goggins Posted over a year ago

Mr. Copes is an awesome teacher. He truly deserves this award, because he is truly a life changer. So many students who could care less about school, became successful students because they were doing things with their hands and they were doing activities they were interested in and could actually see the results of their efforts. Students would stay after school, come to school and work on projects on the weekends or holidays. I approached him about designing some aquatic wheelchairs that our special needs students could use in pool. His students were divided into groups and they designed some amazing chairs and then made a presentation of their designs and it was amazing to listen to the excitement and pride in their voices as each group presented their design to a group of teachers, parents,and students. A true life changer

Debbie Buchanan Posted over a year ago

This is awesome and impressive what you have, and continue, to accomplish! You are a true leader and innovator! You have my vote!

Amy Fineburg Posted over a year ago

Brian lives the phrase “real-world learning.” He constructs problems for his students to solve, and he is open to his students proposing projects to work on! Not only do his students learn, but they make a difference in the world. He is a true Life Changer!

Robin Lucas Posted over a year ago

Excellent! Mr. Copes is most deserving!

Melissa Morris Posted over a year ago

Congrats Brian Copes! This is a well deserved honor... thanks to your generous gift of time, energy, empathy and guidance young people not only learn how to be life changers for others, you empower youth to make greater differences in the world as they grow while changing lives of those in need. I am in awe of you and your young crew of life changers. Proud to know you!!! Keep inspiring! You have my vote ??