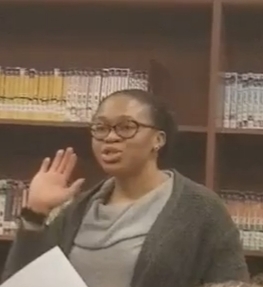 Ruby Chukwuelue was nominated by Lashun Newsome, the parent of a student.

"Mrs. Chu, as everyone calls her for short,  is absolutely amazing. For the past three years, she has been my daughter's math/pre-algebra teacher," said Newsome. "From day one, she has been positive, organized, supportive, and dedicated to her students! She is the chosen one because she not only teaches, but encourages, motivates, and inspires her students daily. For example, she tutors three times a week before and after school. She is easy to talk to by phone, email, and through Remind."

"She is also a BETA Club teacher, so her community work is exemplary," said Newsome. "My daughter has been active in BETA for the past three years. They have enjoyed their travels to Savannah every year with Mrs. Chu for the National Convention."

"Mrs. Chu is a hands-on role model," said Newsome. "In a conversation that she and I had at the beginning of this month, I had tears of joy when she opened up to me. In her own words: 'I love this job because of the people who I work for...the young people...our future.' She also said that: 'every day, minute, and word that she spends teaching her students matters.' She has made me the happiest parent at Turner Middle School. Mrs. Chu rocks!"