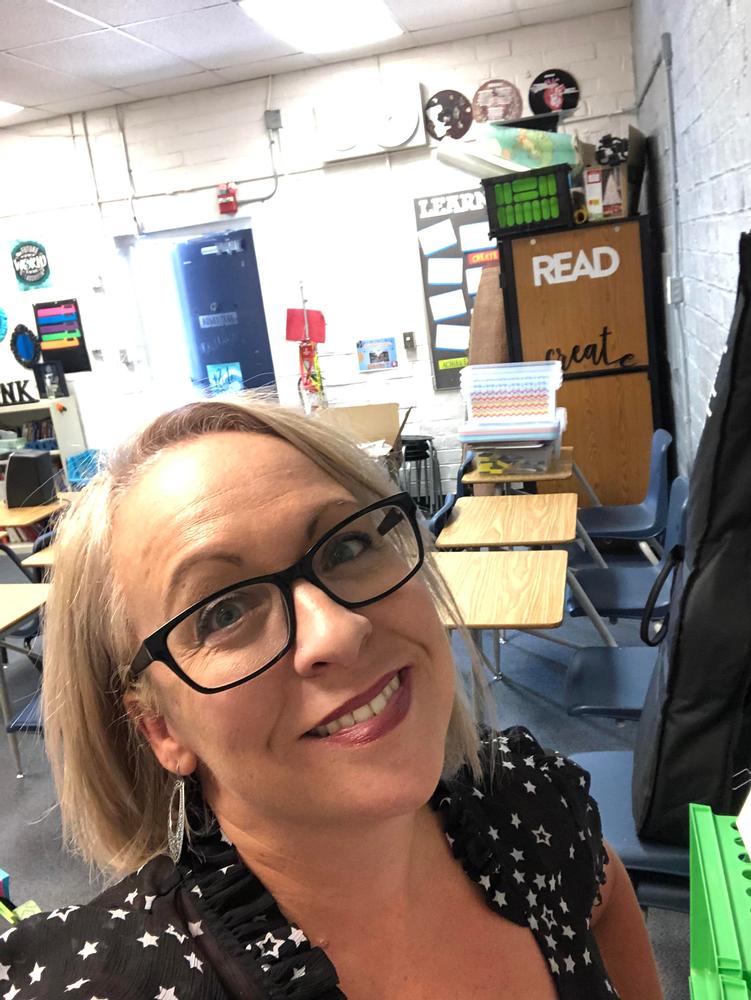 Stacey Dallas Johnston was nominated by her friend, Jennifer Rios, as well as her husband, Jason Johnston. The following profile contains text from both nominations.

Mrs. Johnston teaches at Mission High School (MHS) in Las Vegas. MHS is the first public funded school for students in drug and alcohol recovery. It's a part of the fifth largest school district in the country, Clark County School District. Other recovery schools exist in other parts of the country, but none are fully supported with public education dollars.

Mission is the perfect environment for Mrs. Johnston. She is creative and innovative, and she is a champion for equitable education. She has been awarded all types of recognition, and it never changes her. Mrs. Johnston is focused and humble, and she loves what she does,

"I see my wife being a superstar every day, and sometime she doesn't even realize it," said Mr. Johnston. "Going above and beyond is second nature to her. I've been with her since our first year of being teachers. Even when she struggled with being a new teacher fresh out of college, she was the first to volunteer to teach early bird reading readiness classes. She also jumped right in to be the volunteer advisor for the after school drama club. I remember to this day how she put on a handwritten play, using furniture from our house as props."

When schools shut down in March 2020 due to COVID-19, Mrs. Johnston was like many of us: grappling with the news of the pandemic while trying to balance her safety, her family's safety, and the physical, emotional, and academic wellbeing of her students. It took less than a week for her to spring into action. Knowing that her students were especially vulnerable, she prioritized maintaining her connections with them and monitoring their well being. CCSD put a freeze on teaching new material, so instead of inundating students with packets or unneeded review, she made continuous learning fun.

Mrs. Johnston created a Facebook group called Creative Minds in Uncertain Times. Within a week, the group had 500 members. She shared original distance ed lesson plans and gathered all types of resources. At the same time, Mrs. Johnston used weekly choice boards to connect with her students by having open Google Meets meetings and posing choice board challenges to the kids. One week, whoever finished first got a prize. Another week, everyone who finished got a prize. The first round of prizes was mailed, but after that, it became part of a weekly "get out of the house" adventure to drive to each student's home and leave prizes--hot cheetos, books, candy--on their doorsteps. This continued for weeks, growing into a family affair where Mrs. Johnston, her husband, and their two children drove around the city to drop surprises. On one Saturday, they drove over 100 miles and did it all with a smile.

One of the coolest prizes came out of Mrs. Johnston reconnecting with a former student, who is now a professional musician. Together, they worked out a plan. He not only donated guitars that Mrs. Johnston delivered to her students' homes, but he donated his time once a week to teach the kids how to play their new instruments. Mrs. Johnston was on every Zoom call, telling the kids what a great job they were doing and encouraging them to explore music. The fact that she could so easily connect with a former student and have him agree to do this shows that the relationships she build with kids last a lifetime.

"This is just who she is," said Mr. Johnston. "She is for sure a type-A personality, but it suits her. She's a go-getter and never stops being one of the greatest teachers I know."

As talks of school resuming began, it was decided that CCSD would remain 100% virtual. Mrs. Johnston sprang into action once again. She built an Amazon wish list to piece together "learning boxes" for all of her students. What began as a quest to make 15 boxes grew into a goal of outfitting the whole school with a plastic tub filled with school supplies, brand new novels, headphones, and so much more.

With the help of the community, her colleagues, and pitching in a fair amount of out of pocket money, every single student got a tub filled to the brim so they could start the school year off right.  Weeks later, the students are doing well. They have started digging into one of the new novels, and every student on campus has been able to engage in projects and arts integration from their own homes thanks to the learning boxes.

"I am proud Mrs. Johnston and all that she does to support the students she works with and the way she fights for equity inside and outside of her school," said Rios.

For years I’ve been amazed by the efforts you put forth with your kids and the activities you do to improve upon all the areas of education. From working directly with the kids to the levels you’ve reached working behind the scenes you always show the passion you have for education. You’ve touched the lives of so many children. It’s incredible to see how dedicated she is and how much she gives back to her community.