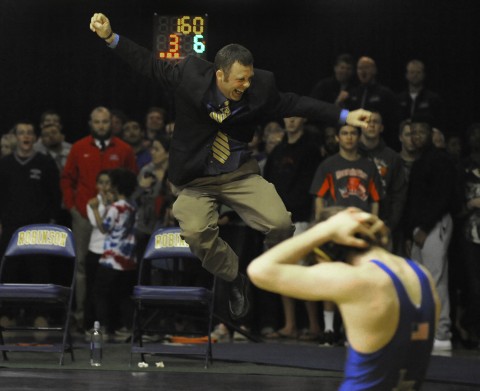 Bryan Hazard was nominated by Michael Mukai, the parent of one of his students.

Mr. Hazard has changed the lives of so many students over the past 20 years. As a teacher, coach, and mentor, he has helped many kids discover their potential and develop into great young adults. Mr. Hazard has been a teacher at Robinson Secondary School, his alma mater, since graduating from college. He returned to the community he loved to give back to the next generation of students. As a head wrestling coach, Mr. Hazard has won a multitude of awards that include multiple individual and team state championships. He has helped raise money to support the Wounded Warriors and has worked with a number of events as an announcer and master of ceremonies to help countless causes. He is the type of man who everyone turns to when they want something to be a success. Mr. Hazard runs pep rallies and large events at Robinson and is known as the voice of the Rams. More important is the impact he has had on individual students.

"Mr. Hazard has always helped kids find their way," Mukai said. "When my son joined the Robinson wrestling team, Mr. Hazard set goals for self-improvement that were not focused on wrestling. He wanted to see my son develop socially and emotionally and put those as priorities. I cannot begin to share how much I appreciate what he has done for my son. I have watched him become a young man worthy of respect."

While Mukai is proud that his son won the state championship in wrestling, it is far more important that he has become a man of character and kindness under Mr. Hazard's mentorship. Mukai's son is among the most recent examples of students whose lives have been changed by Mr. Hazard.

Over the past 20 years, people at Fairfax County Public Schools have seen his students matriculate and become doctors, lawyers, teachers, military officers, and CEO's. Mr. Hazard's work has touched the lives of many. His work will have lasting effects into the future, and that's why he's a true LifeChanger.

Matt Eline Posted over a year ago

I support this nomination. Mr. Hazard is a fantastic staff member who changes the lives of his students! Matt Eline Principal Robinson Secondary School