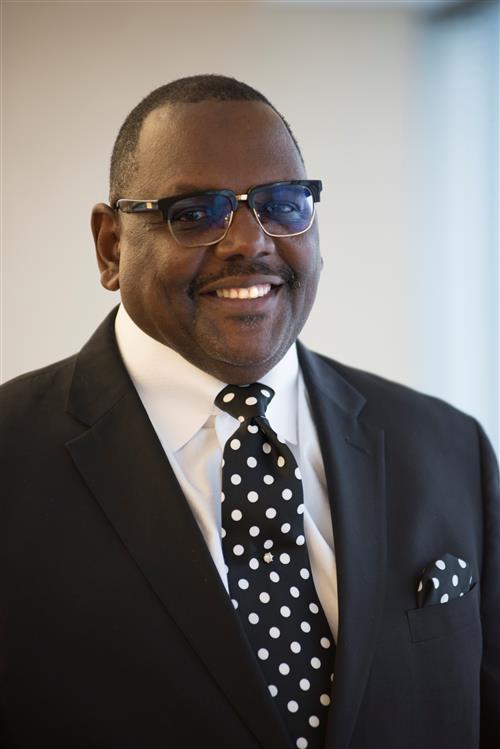 Ted Ginn was nominated by Kathie Denise Williams, a parent of a student.

All you have to do is Google Coach Ginn, Sr. to understand that he is Cleveland royalty. He is the dominant leader in shaping the lives of young, urban Cleveland men, where most others might have lost hope. Williams understands the effects of Coach Ginn's commitment because her son was a child who was headed towards becoming a statistic.

"My son was part of the first graduating class of Ginn Academy," Williams said. "I visited a few weeks ago, and to see those same halls where my son once walked, now filled to the brim with so many young men, poised, polite and engaged in their desire to learn....tears welled up in my eyes. It's all thanks to the inspiration of the man to which the academy bears his name."

When Williams' son, Christopher, was introduced to Ginn Academy at the age of 13, he was headed in the wrong direction. In 9th grade, after Williams dropped him off one morning, he was caught walking out the back door of the school. He had an attitude that was combative, disrespectful, and violent. As a struggling single mother of two, Williams was at her wit's end.

Williams took him from the public school he was attending and homeschooled him, hoping to raise his GPA. At the same time, she had Christopher checked out by psychologists and learning specialists. She was startled to learn that he was not only autistic, but had ADHD and severe anger issues, the latter which stemmed from a non-existent father who believed that negative reinforcement and “tough-love” were a way to shape a young male mind.

"Shortly thereafter, I approached Coach Ginn and asked him to help me find a location for my son to attend school," Williams said. "In response, Coach said, and I quote, 'Send him to my school, I will work with him.' To say that I was skeptical was an understatement. Trust wasn’t easy for me, and as a single mom, I was stressed beyond measure. Giving the complexities of my son’s needs over to Coach wasn’t something that I was hopeful would prove successful."

Williams had heard it all, and she didn’t think that anyone would be able to help Christopher or do anything to pull his failing grades to passing. She had nowhere to turn, so in desperation, she challenged Coach Ginn.

"I gave him one year to show me that my baby was going to make it," Williams said. "Coach smiled and said, 'oh...he will change!'"

Three years later, Christopher not only graduated from Ginn Academy, but he graduated with honors. He entered Ginn Academy with a 1.9 GPA and left with a 3.75 GPA and a full ride academic scholarship to Notre Dame College. The once angry, defiant, lost child found his path through the grace of Coach Ted Ginn, Sr.

"I will never forget the announcer at the award ceremony for the first graduating class of Ginn Academy shouting my name three times before I realized that they were calling me," Williams said. "I couldn’t believe it! I kept looking over my shoulder for the mother of the child that just received academic honors when my friends slapped me on my back and said, 'Kathie, that’s you! They’re calling your name in honor of Christopher! Get up! It’s your son!' To this day, it brings tears to my eyes."

Through the mentoring of Coach Ginn, Christopher went from a low GPA and defiant attitude, to a highly educated student who is prepared for the next chapter in his life. Coach Ginn demanded strict adherence to structure and respect, and he worked right along side Christopher, to see that he would succeed; along with every young man that walked the halls of Ginn Academy.

Coach Ginn knew that the boys needed strong male leadership, so he brought strong male leaders to campus. The boys were paired with leaders, whose sole job was to mentor at-risk youth and help them become successful and understand the importance of their own life.

In the ten years since it opened, Ginn Academy has risen in ranks to become one of seven schools in the state of Ohio to receive the Governor's School Innovation Award. It was Coach Ginn’s vision that inspired his commitment to the school’s 24-hours-a-day, four-year-long “life coach” mentoring program that has helped students develop the skills necessary to enter the workforce. Coach and his magnificent team of professional educators partner with local business leaders to bring about the change necessary in a world where chaos is normal.

As a result of Coach Ginn's efforts, Ginn Academy's graduation rate is 94.4%, unheard of for an urban school. Students have received millions in college scholarships, and 83% graduate with a four-year college degree or enlist in the military.

"Christopher graduated with honors from Notre Dame, entered the Army in military service, and has recently been promoted to Sergeant," Williams said. "He is slated to earn his Master’s Degree and, once completed, will eventually become a Lieutenant. To say that I am a proud momma, well…I should be…Christopher worked hard! And he worked hard because he had someone. That someone was Coach Ginn. Coach could see past the anger, see past the learning nuance, and see the man that he would eventually become."

"As I walked those halls a few weeks ago, those same feelings I had came rushing up to the surface once again," Williams continued. "I knew that the gift Coach Ginn gave Christopher a few years ago is the same gift he is inspiring in every one of those boys who proudly wear their suits and ties every day."

"My son is one of many whose lives have been forever changed by the grace of Coach Ted Ginn and his commitment to the young men of Cleveland, Ohio," Williams said. "There is no better example of what the phrase “LifeChanger of the Year” represents."

Amy Schiff Posted over a year ago

This brings tears to my eyes. Coach Ginn leads by exemplary example, what it means to be human. To see the individual and his/her strengths beyond the societal assumptions and costumes. As a mother of a teenage young man, I would be excited and honored to meet Coach Ginn and capture one of his golden nuggets of experience. Thank you for finding this Life Changer!