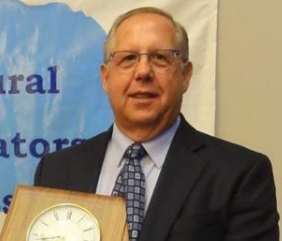 Craig Frederick was nominated by his colleague, Roy Wright. Wright taught next door to Mr. Frederick for three years, and in that time, he was able to see what it takes to be a great educator as well as a great person.

After several years in the classroom, Mr. Frederick moved on to be the Director of Agriculture Education for the state of Nebraska. After his time there, he worked with the National FFA organization and was able to travel the country working with high school FFA chapters. After several years, he was ready to get back to the classroom. Mr. Frederick was hired as Seward High School's Agriculture Education Instructor, where he was introduced to Wright.

"I can't even imagine how many lives he changed before I knew him," Wright said. "His travels around the country working with other educators and students leads me to believe that the breast of his impact is incalculable! What I do know is how great his impact was on our district. Mr. Frederick is a leader among the staff at Seward High School. Many staff members look up to him for advice, and since he has such a vast range of experiences in education, he is able to see things with a broader lens than most."

Wright is most grateful to Mr. Frederick for allowing him to observe how he interacts with students. He has the highest moral standards of any teacher Wright has ever been around. Not only does Mr. Frederick hold himself to high moral standards, but he holds his students to those standards as well. His classroom atmosphere is one where students can completely trust him, knowing that he has their best interests in mind. Mr. Frederick doesn't have a selfish bone in his body, and the kids know it. Despite his generosity, he is an educator who won't be taken advantage of, and his students know that as well.

While he maintains very high expectations for his students, he is still able to build very strong relationships with them. He always has former students, who are home on break from college, stop in to visit with him and share what they have been up to. Students always return to visit Mr. Frederick because they love him, and they knew he loved them back.

"I consider myself very fortunate to have been able to eat lunch with him every day for three years," Wright said. "Through our conversations and friendships, he has made me a better person, father, husband, educator, and friend. I can't thank him enough for that. My family and I moved away from Seward last year and I can honestly say there isn't a lunch period that goes by that I don't wish I was headed to his room for a quick bite and a great conversation."

"Mr. Frederick isn't just a great educator - he is a great person," Wright continued. "I'm so grateful for the time we were able to spend together at Seward High School. I'm also grateful for the countless number of students he has made an impact on in the same way."

Craig Frederick in the News:
SHS’s Frederick nominated for LifeChanger of the Year award