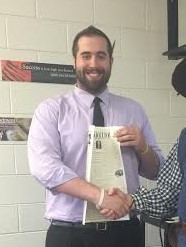 Seth Warren was nominated by a former student who wished to remain anonymous.

The nominator is a former student from Warren's graduating class of 2016, yet Warren he has continued to be a mentor to them, even after they graduated. They emailed Warren hundreds of times during their freshman year of college because they needed help adjusting to college life and how hard the classes were. Warren is there when anyone needs him.

"He is the only teacher me and my friends go back to RRHS to see," the nominator said. "He is a great basketball coach, an unbelievable teacher, and makes sure we are successful for our entire lives."

Mr. Warren took a group of young men to the local community college, where they met other positive male role models so they could see that regardless of where they come from, they can be successful. Mr. Warren also does Flag Retirement Ceremonies at his school with a local organization. Hundreds of people show up to these ceremonies. Additionally, Mr. Warren recently won a medal for Good Citizenship from the Sons of the American Revolution.

Mr. Warren is also constantly helping other teachers in the school. When the nominator had him last year, they would always see other teachers coming to him for help, and he would give up his free time to help anyone who needs it. Mr. Warren is not your typical person. He is a mentor. A friend. A father figure. A big brother. And a role model. He is the heart of Roanoke Rapids High School and he is a definition of a LifeChanger.

Luke Burch Posted over a year ago

Mr. Warren has inspired me in many different ways. I was in his first class he ever taught and we bonded immediately. He also was one of my basketball coaches and I knew I could always count on him for anything. I graduated in 2016 and we still stay in contact and I know I can always seek advice when needed. I'm so grateful for having a true friend and role model like Mr. Warren. He is a big reason I am perusing a degree in education. He definitely deserves recognition for what he's doing for RRHS and will always be one of my favorite teachers I've ever had. He has been a huge role model for me and I can never thank him enough for what he's done for me. He is like a big brother you can always count on. Keep up the good work Warren!!!