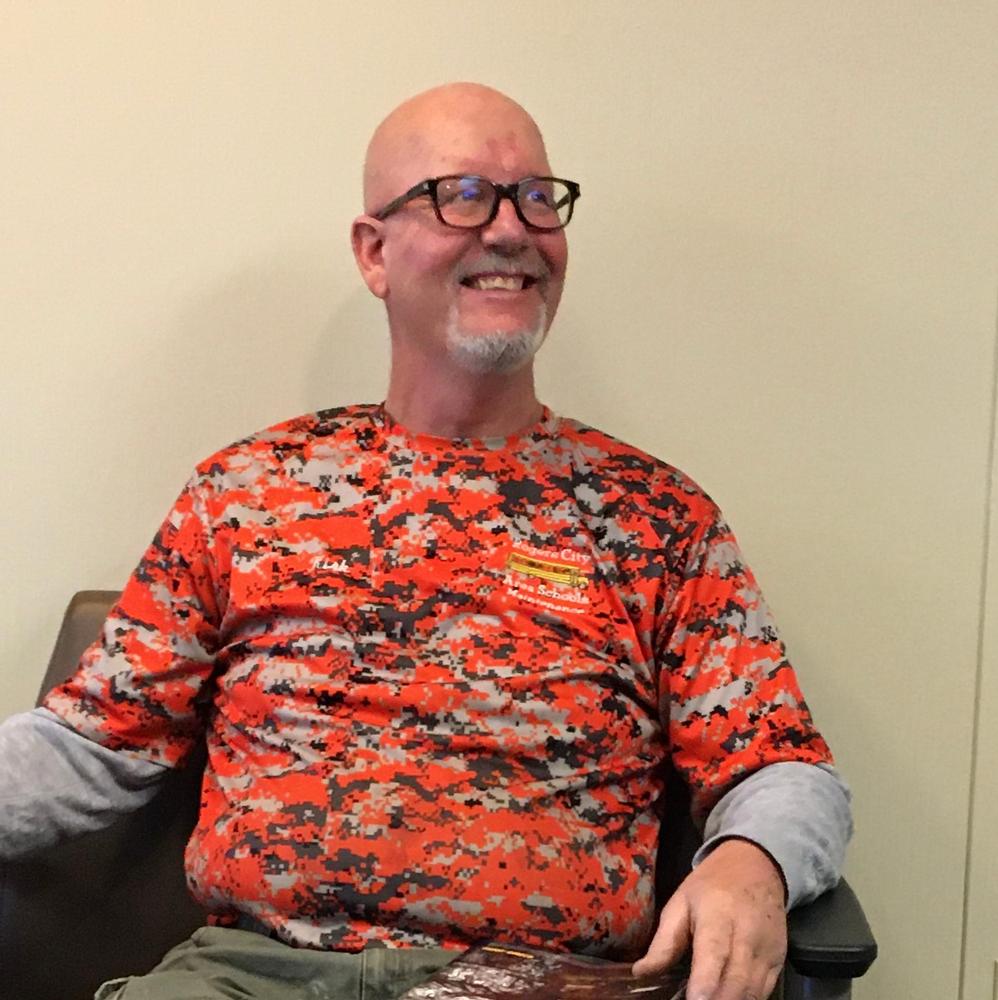 Kirk Schaedig was nominated by his colleague, Sarah Simmons.

In most small school districts and school districts in northern Michigan, you see schools that are understaffed. At many of those schools, the lack of staff is evident by walking into the building or even just driving by. Rogers City Area Schools is like many smaller school districts in regards to the maintenance, janitorial, and transportation department. It's different, however, due to one man: Mr. Schaedig.

Mr. Schaedig has been an employee at Rogers City Area Schools for 33 years. He could have retired when he needed to have surgery for his back. Instead, he worked countless hours before his surgery, making sure his school would continue to run smoothly and training an employee to fulfill his duties. After Mr. Schaedig had his surgery, he took time to heal and was quickly back at the job. Despite the countless hours and hard work, he will always give you a smile and never say no to anything asked of him. At the end of this school year, Mr. Schaedig has made the decision to retire. Although his retirement is fully deserved and earned, his school district is losing a valuable member of their team.

Mr. Schaedig has knowledge that few people are capable of having. He doesn't have knowledge in only one area, but multiple areas. He takes the initiative to make every single part of Rogers City Area Schools, clean, inviting, full of Huron pride, and most importantly, safe. Mr. Schaedig cares a lot about his school’s safety, not only in the actual buildings, but on the school buses and in the sports complexes.

Mr. Schaedig and his crew have recently received 100% on the Michigan State school bus check. This is a huge honor to have all of his district's school buses in tip-top shape, and it shows how important safety is to him. Mr. Schaedig has volunteered to ride bus routes with children who need refreshers or need to be taught how to ride the school bus safely. Last year, he purchased prizes to award students who were safe and courteous on the school bus throughout the year.

Mr. Schaedig takes it upon himself to make sure his school district looks inviting. He will make sure the grass is mowed, even if it's 8:00 PM on a weeknight or on a weekend. He has no set working hours. Mr. Schaedig always says, “Well, somebody has to do it.” During the summer months, you will see him late at night mowing the sports complexes. Even though the season is over, he still wants the areas to look nice. He will spend countless hours painting the football field by hand, not only the lines, but the logo in the middle of the field.

For many years, Mr. Schaedig has lived his life with the mindset that his school district comes first. He has woken up around 3:00 AM to make sure the roads were safe for his drivers and the students. Last year, there were days when he barely slept during multiple snow storms. If he wasn’t checking roads, he was shoveling, salting, or plowing. As Mr. Schaedig would say, however, “somebody has to do it.” Instead of calling his employees and having them come in during a snowstorm or in the late hours of the night to check a false fire alarm, Mr. Schaedig takes the leadership and stops what he is doing in his personal life to make sure his school district is safe and inviting.

Mr. Schaedig is a supervisor who wears many hats and has a lot of people relying on him, but he has no problem answering a call for a janitor to change toilet paper, clean up after a child who is ill, or do anything else that may arise. He sees himself as an equal to his employees, which is a positive thing. He works alongside his employees and not only shares his knowledge of transportation, maintenance and janitorial skills, but his integrity, confidentiality, attention to detail, and care for the students and staff. Mr. Schaedig does not see himself as a supervisor, but an employee of Rogers City Area Schools. He is proud to be part of the Huron Family!

Even with all of the hats Mr. Schaedig has worn over the years, he has taken it upon himself to help students in years' past by having them shadow him. By doing this, he was able to teach students the skills of a maintenance worker. Whether it was because of students needing community service hours or simply wanting to pass his skills on to the younger generations, Mr. Schaedig took on another job: the job of a teacher, mentor, and someone a student could look up to.

"After 33 years, we will start our school year next year without our LifeChanger," said Simmons. "I could continue writing and sharing experiences of how Kirk has changed and helped so many lives, but it would take days! I feel this award would be an honor for Kirk. He deserves to be recognized for the countless and selfless acts he has done for our school district over 33 years."

Mary Przybyla Posted over a year ago

Kirk is a reliable, generous and friendly source of help and support to me and the school. As a substitute, that kindness and support is a big help in navigating the surprises in classrooms or halls of the school. Thank you, Kirk.

kathy Strugala Posted over a year ago

Kirk is my classmate from RCHS. He is truly one of the kindest people I know. Very hard-working, extremely dedicated to work, family and friends. He has the work ethic of a warrior. Not only is he knowledgeable in his job, but is multifaceted regarding the Rogers City High School's needs. He has dedicated 33 years of his life to his job and his people, and I have never heard him say anything "negative" about his profession. He speaks highly of the kids he transports on the school bus, and shares with humor some of their many "stories." Kirk has a strong Faith in God, which shows in his kind actions and words. I'm so pleased he has been nominated for this amazing awared. God's blessings to you my friend, and may you enjoy a happy, healthy retirement. See you soon! Kathy

Diane schultz Posted over a year ago

Kirk is very deserving of this award. No one works as hard as he does to make our school the best that it can be It has been an honor to work beside him for many years

Mark Thompson Posted over a year ago

Whenever I have needed to use school buses or borrow chairs from the school, Kirk's response is always positive and helpful...Always!!!!! He is a role model in many, many ways.

Michelle nash Posted over a year ago

This man deserves to win this and much much more!!!!!

Holly Wirgau Posted over a year ago

Kirk, you are truly deserving of this award! Everything written in your nomination truly reflects the kind of person you are. Your smile and good humor lit up the day for me. You were always available when I needed help; like another pencil sharpener :), checking in on my salmon in the classroom, and replacing light bulbs, to name a few... It will be very difficult, if not impossible, for someone else to take over your position! You will certainly be missed, but are very deserving of retirement! Thank you for all you do for the school grounds, busses, staff, and students of Rogers City Area Schools! Holly Wirgau, Retired Teacher RCAS