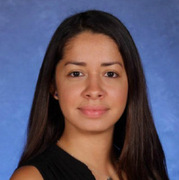 Isamara Berrios was nominated by her older sister, Leandra Berrios.

Ms. Berrios is the daughter of immigrant parents who fled their beloved land of Nicaragua due to political unrest and dire conditions during the Revolution that took place in the 1980s. Crossing the border proved to be perilous and daunting. Her mother was not only pregnant, but was also leaving behind all that she knew. Imagine that. Being ripped apart from your culture, family, and all that you are...risking your life and heading towards a destination unknown, only heard of through movies and television. Her mother was closing a chapter and starting another in the United States of America. She was arriving in a country that would provide her children with opportunities they normally couldn't have.

Ms. Berrios was born on May 23, 1990 and grew up in the city of Miami, FL, in “el barrio” of "Little Havana." She was raised in dangerous living conditions; her family of 6 lived in a two-bedroom apartment, which was arduous and inconvenient. For Ms. Berrios, seeing her parents endure hard labor and exploitation was painful, to say the least.

While growing up, Ms. Berrios always wanted to become a teacher so she could help change lives. She credits her success and educational attainments to selfless teachers who worked tirelessly to shape her trajectory. Growing up in poverty and aspiring to achieve higher education requires an enormous amount of resilience. Her parents did not speak English and could not provide resources and experiences that other children her age were afforded, so she needed to work a little bit harder and could leave no room for error.

"I will always remember watching her succeed academically," said Leandra. "Additionally, she was always a leader. She was someone people could look up to."

Life works in mysterious ways and is full of surprises. Years went by, and Ms. Berrios graduated from Miami Senior High School, where she now teaches. She has been in the classroom for eight years and has immersed herself in the community she remembers growing up in. Her life has come full circle. She never imagined she would be a first-generation graduate from The University of Florida and be inducted into the Hall of Fame. She never imagined she would join Teach for America, travel around the world, and most importantly, give back to her community and her family. As an English teacher, she reminds her students that to study English is to study life. She not only teaches English, but she also serves as the Teaching Magnet Lead teacher, which allows her to have an impact on almost 500 students. She is also responsible for advising the Future Educators of America Club. Through this organization, she promotes the teaching profession and puts on Teacher Appreciation Week, which takes place during the first week of May.

Most recently, Ms. Berrios decided to start a shoe drive for orphan children in Guatemala with the help of her Future Educators of America students. She rallied the students at Miami Senior High to donate shoes for children who were abandoned in Guatemala because of their health conditions or extreme poverty. Some of these children contracted HIV at birth. This is just another example of how she is inspiring the next generation. She pushes her students to think beyond themselves and to consider a global perspective. It is evident that she is a LifeChanger, not just within her classroom, but anywhere that she goes.

Many of her students call her “mom.” The reason is because at times, she has had to feed students whose basic needs were not being met. She has also purchased clothes, school supplies and other items for her students because if she did not, then who? Miami Senior High is a Title I school, where the majority of the students depend on free or reduced lunch. There is also a huge population of undocumented students who often look to her for guidance. She is not just a teacher who grades essays and teaches kids the essential skills to pass their FSA exam. When you start to think about her role in the “Little Havana” community, you realize she wears many hats on a daily basis.

Because of her work, Ms. Berrios has been rated Highly Effective by the state of Florida during the last 5 years and is clearly a force to be reckoned with. She does great work for the children at Miami Senior High and various other organizations that she has been involved with during her professional career, including Breakthrough Miami, Achieve Miami, Donors Choose, The Education Fund, Take Stock in Children or ACLE.

"All in all, Isamara remembers the reason her mother risked her life and endured great hardships when she crossed the border almost 30 years ago," said Leandra. "She feels it is only right that she maximizes the opportunity that she has been given and to lead by example for the up-and-coming generation. I know that her students believe, 'If Miss Berrios could do it, I can too.' That idea has made all the difference in the lives of hundreds of children."

Juliet Posted over a year ago

Ms. Berrios is an absolutely amazing teacher. She goes above and beyond for her students. She is an excellent role model and has exceptional values. She truly is the definition of a life changer. No one is more deserving of This award! Go Ms.Berrios!!

Adriana Cristales Posted over a year ago

During my sophomore year I was Miss Berrios’s student, this was a wonderful experience. I obtained an enormous amount of knowledge and gained various skills that I can use at school and in the “real world”. The energy Miss Berrios portrays is unique and her passion for teaching reflects not just in me but in all her current and old students. She is a true hero, her class inspired me to never give up, I succeed to passed my FSA exam which was a big accomplishment. Thanks to Miss Berrios for sharing her passions of learning with her students at Miami High.

Yvette Smith Posted over a year ago

Ma.Berrios is the most humble teacher anyone can have . Not only does she teaches her student with great skills but she has a passion to change lives and better people . She has so much aspiration in life and in her students. She is a teacher to most but a public figure to all. I’m grateful to have Ms.Berrios in my life; especially during times of need of guidance. She deserves a lot but in my opinion she deserves the world.

Darria Whitley Posted over a year ago

Ms.Berrios is like a mother figure to me. In the beginning we didn’t see eye to eye but i realize she was just preparing me for life ahead of me. I love her so much and i love how she put her students to be better people.