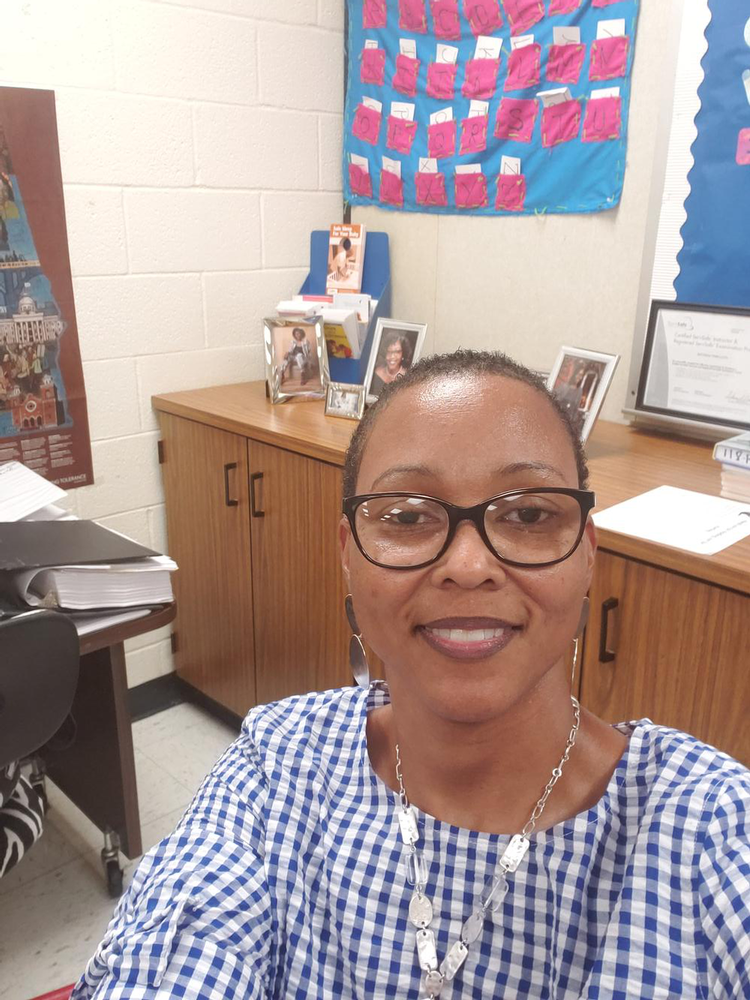 Natasha Faircloth was nominated by her principal, John Goode.

Ms. Faircloth states that prior to finding her true calling in education, her journey started after graduating from Clinton High School in 1996. She pursued a degree in business administration from Fayetteville State University, with a minor in Banking and Finance. After graduating, she began working at the State Employees ‘Credit Union phone center in Raleigh NC. She wasn't completely satisfied, and wanted more social interaction with the public. Months later, she joined the American General Finance Company, where she continued building her career. Even though she gained more experience and was eager to help people, something was still missing.

Two years into her career as a Loan Officer, Ms. Faircloth was approached in a general conversation about working with children with possible behavior issues. This job gave her the flexibility to work one on one in the community as a mentor to  children and their families.  At this point, she would assist in supporting children struggling with social, emotional, and extreme behavioral issues in the home, community, and school.  She had never thought about the possibility of supporting children as a CBS professional (community-based professional).  Most of the children were aged 5 to 18 and lacked social skills, so as a one-to-one professional, she supported their engagement in community settings.

Ms. Faircloth found herself emotionally connected to these families and children. These children and their plights occupied her heart and mind. She wanted to do everything possible to make sure they thrived and survived in their environment because their environment -  in her eyes - should not define who they were.

After five years, Ms. Faircloth found herself working for the Partnership for Children of Sampson County as a Parents as Teachers educator. She also worked for Charles E Perry Elementary School in Sampson County School System as a teacher assistant in the Exceptional Children Department. SCPFC was an amazing experience for her. She was given the opportunity to connect with families on a more intimate level.  She assisted parents, grandparents and foster parents with understanding young children.

Sometimes, parents did not understand how their children developed on all domains starting with physical, motor, cognitive, and language development.  Ms. Faircloth provided home visitation services to assist parents in recognizing and supporting their children’s overall development.  She promoted literacy awareness in the home, by providing stimulating activities that encouraged parents to create, as well as games that fostered relationship-building and created an environment that allowed children to explore. One of the most powerful moments she recalls was a parent talking to her about what their children have begun to do at each stage of development.

Within the organization, Ms. Faircloth was given the task of working with pregnant teenagers in Sampson County.  She wanted to help these young girls understand the importance of raising a child who is both socially and emotionally stable, even with their youthful perspective. She encouraged them daily to do and be better for their child and themselves.  Ms. Faircloth felt like she found her purpose in life - to continue to inspire, encourage, provide support, and build positive relationships with her students. She strives to give hope to those who are hopeless.

Over the years, she has seen many broken children. She has seen children who were physically and psychologically abused.  She always tells her students that they have a voice, and they are not defined by their zip code, race, or religion. They are so much more, and they are enough.

"Each year, we hear from countless students who speak of the hope, encouragement, and courage they gain from their time with Ms. Faircloth," said Goode. "It is for this reason that we believe she is deserving of this recognition."

Edith Parker Posted over a year ago

Congratulation Natasha!! Natasha and I worked together at Charles E. Perry in the EC department. She is inspiring, positive, encouraging, a great role model, and teacher to all the students. I'm so proud to know her and to call her a my friend. Thank you for all you do for the students you come in contact with. "What comes from the heart goes to the heart"!! This quote exemplifies you!! Your Friend, Edith Parker

Lawanna Parker Posted over a year ago

It takes special people like you to make a difference in the lives of those who otherwise would be overlooked. In looking at the three songs that best describes you, I must say that God has filled you up so that you can rise up and now you're on fire by letting your light shine on others. Keep keeping on!!!

Bobbie Alexnder Posted over a year ago

Ms. Faircloth is a Teacher that goes beyond the walls of her classroom. Always searching for way to impact the minds of our students. Her goal is to assist our youth in knowing who they are and what they can achieve. She has no boundary for preparing them to become the best they can be them for the future This speaks volume to the person Ms. Faircloth is to our Future.. I feel she is certainly deserving of this nomination.

Christina Robinson Posted over a year ago

Mrs. Faircloth answered a calling on her life when it wasn't necessarily a convenient time. She was working in her degree field and a causal conversation changed her life and the path of her career. She could have continued working in banking but she decided to dedicate her life to public service. Thank you Mrs. Faircloth for working with students and looking at the whole child and trying to meet their needs. Please continue to be an inspiration.

Amy Posted over a year ago

Ms. Faircloth holds high expectations for her students. She works with them individually to aid in their personal growth. She requires them think, create, and problem solve. Her lesson plans are very thoughtful and relevant. Our students at LHS are very lucky to have her for a role model.

Janette Williams Posted over a year ago

Ms. Faircloth truly cares about her students and puts the extra effort in to get to know each student on a personal level. She strives to help her students develop into valued members of society, by teaching independence, self-help skills and ways that they can give back to their communities. She is a life changer to all the students that are lucky enough to have her as a teacher.

Andrea Bell Posted over a year ago

I see why Ms. Faircloth was nominated. She has a heart for children and parents who children are struggling with social, emotional, and behavioral difficulties. Kudos to you Ms. Faircloth!

Jaimie Kelly Posted over a year ago

I have had the opportunity to work with Ms. Faircloth for the past 3 years. As a special education teacher it is a tough balance sometimes to stretch kids to their potential without them becoming too frustrated. In working with my students, Ms. Faircloth did a beautiful job of maintaining that balance. She always expected all of my student's very best by not letting them take shortcuts but would bend over backwards to make sure they understood and had all accommodations needed to be successful. She has been "life changing" in the lives of my students she has worked with.

William Posted over a year ago

Ms. Faircloth displays 3 Great qualities Dedication, Determination and most of all a loving Spirit with these abilities, I’m sure she passes to her students .. For this I personally can not find a more deserving person to be nominated for this award.

Shirley Posted over a year ago

Natasha is a beautiful soul. She loves working with her students and becoming a life changer. She would often stay late hours with students who have questions or who may be going through situations of their own. The kids find her as not only a teacher but , as a “Mother “ figure to them as well. She has a warm and generous heart for her Co-workers and her principle.

Angela Posted over a year ago

Ms. Faircloth is one of the most inspirational teachers of 2019. She exposes her students to new ideas and new perspectives of life and how it can relate to their lives. She teaches them to see the negative impacts a “working progress” instead of the ideal “I can’t “ or “ I couldn’t “