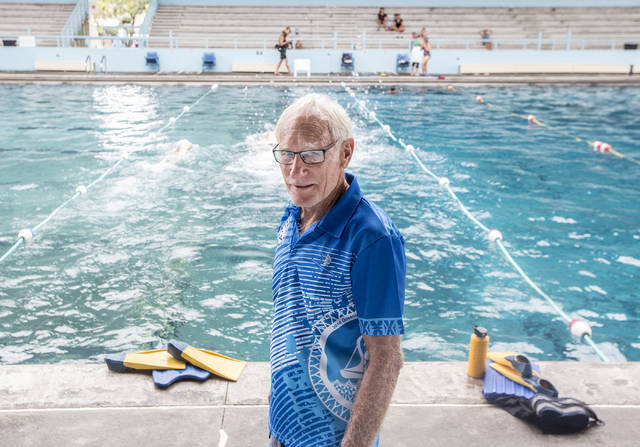 Bill Sakovich was nominated by an anonymous student.

Coach Sakovich is more than a swim coach to the hundreds of swimmers he has coached over the years.  He is a role model and an inspiration.  His dedication to the sport of swimming, and to his athletes and their futures, is absolutely unmatched. In the town of Hilo on the Big Island of Hawai'i, as well as globally, he has made a huge impact on hundreds of swimmers throughout the last few decades. Whether you're a seasoned swimmer or new to the sport, Coach Sakovich will motivate you to swim and push your limits to see what you're truly capable of.

Coach Sakovich's commitment to the Waiakea High School swim team is incredible. He's often the only coach on the pool deck, where he devotedly runs two to three morning practices per week, as well as afternoon practices every weekday throughout the season.  To give his swimmers exposure to different conditions and to build their endurance, he incorporates openwater (ocean) swims, dryland (conditioning) training, and runs with the team as they participate in local community 5K races such as the Thanksgiving Turkey Trot. He does this in addition to coaching the team at the seven to eight swim meets held around the Big Island throughout the competitive high school season.

In addition to involving his swimmers and giving them the opportunities to grow and achieve, Coach Sakovich is also extremely patient. He works tirelessly to help his swimmers improve their speed and the finer details of their stroke. He stays for hours after regular practice hours to help swimmers who want to learn from him.  Because of his generosity, even swimmers who do not attend Waiakea High School have been able to work with him and learn from his wisdom, as he takes time out of his already-busy schedule to work with them. He works just as hard with swimmers who are new to swimming as he does with those who are contending for top placements at the state level. He believes in giving everyone an equal opportunity to succeed and see themselves improve.

The swim team at Waiakea High School is extremely lucky to be able to say that their head coach is Coach Sakovich.  In addition to playing a huge role in the lives of students in Hilo, he has also won major accolades in the international swimming world.  In 2018, he was named "Father of Swimming in the Pacific" by the United Nations and was inducted into the Northern Marianas Sports Hall of Fame.  He has been instrumental in developing the sport of swimming throughout the Southern Pacific, including in Saipan, where he began coaching in the 1970s before moving back to Hilo, where he had trained. In addition to laying a solid foundation for the sport of swimming in this part of the world, he also heads international swim clinics. Recently, he traveled to Rwanda to work with swimmers there.

"Coach Bill is truly an inspiration to his swimmers," said his nominator. "He has a great passion for the sport of swimming and an incredible love for the swimmers he works with. He has touched the lives of so many, and continues to motivate his swimmers to strive for excellence, not only in the swimming world, but in academics and in their other interests (other sports, music, etc.) In fact, it is not unusual to see him at a school exhibition or at his swimmers' music recital.  Coach Bill has been a LifeChanger for so many of us, and we have learned so much from having the privilege of working with him."