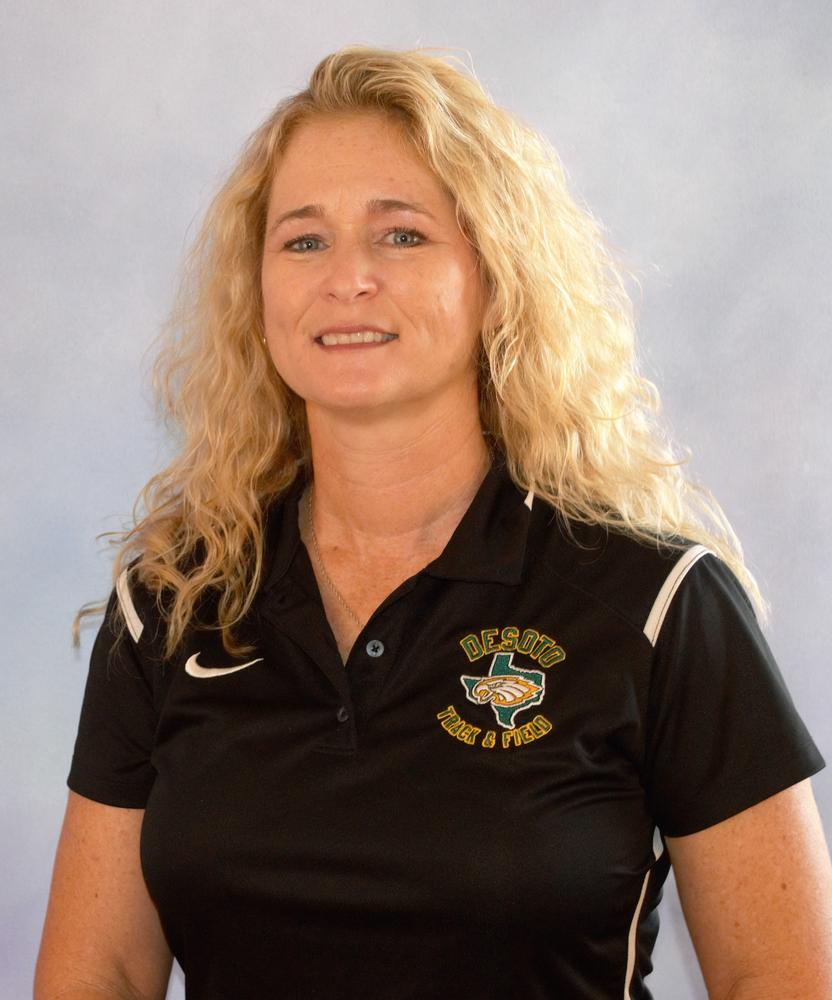 June Villers was nominated by a member of the community, Maria Teresa Garcia Pedroche.

Mrs. Villers taught high school math for 19 years and served as math department head for seven of those years. She is certified in secondary physical education and mathematics, and is a certified athletic administrator according to the National Interscholastic Athletic Administrators Association as of December 2019.

Mrs. Villars is a proud 1991 graduate of DeSoto. She ran track for Brent Jones, who was the head coach at DeSoto for 31 years. She was his assistant from 2002-2007. He retired in 2007 after winning the first State Title for DeSoto.

Under her leadership, the girls track team went on to win the State Championship each year from 2011-2013 and 2016-19, with runner-up finishes in 2008, 2010, and 2015. Mrs. Villers has developed nationally-ranked athletes in all three relays, long jump, triple jump, high jump, discus, shot put, hurdles and sprints.

Mrs. Villers has mentored her student-athletes with the goal of successfully transitioning them into collegiate athletes. Over 50 of her protégés signed full scholarships with colleges, and many more signed partial/academic scholarships. Many more scholarships will be awarded in 2020. She is changing many lives and leaving a legacy in the United States. Many of her students are also moving on to successful careers in a variety of fields.

Mrs. Villers is married to Eric Villers and has 3 sons: Ethan, Cole, and Luke. She has a Bachelor's degree in kinesiology and mathematics from The University of Texas at Arlington, as well as a Master's degree in education administration.

Record-breaking performances were second nature in 2019 for the girls from DeSoto High School in Texas. It takes an extraordinary coach to help those athletes tap into their true potential.

In 2019, Mrs. Villers won the 2019 Texas Track and Field Coaches Association (TTFCA) Coach of the Year award. The leadership, guidance, training, and management from Mrs. Villers and her staff helped lead arguably the best Texas girls team ever, with one of the most dominating performances in UIL state meet history. The team scored 121 team points, which was more than the total of the second, third, and fourth place scores combined. Additionally, the DeSoto 4x100 relay ran the fastest two times of All-Time en route to their State and National Records (44.24).

All it takes is one look at the results from their respective state championship meets – and a little bit of historical context – to understand just how dominant the Lady Eagles were this past outdoor season.

DeSoto entered the University Interscholastic League (UIL) Track & Field Championships in mid-May as the perennial favorite, having won the past three Class 6A state titles in a row. However, that wasn’t enough for the Lady Eagles, especially the seniors, who set a bigger goal for themselves as freshmen.

“The team knew we won three titles in a row from 2011 to 2013, so they wanted to top that,” Mrs. Villers said. “They wanted to win four in a row and do something no other DeSoto team had done. They completely bought in after winning three. A lot of our kids ran cross country more than ever before. They also went out of their way to do more events – and to get more comfortable in them – to give us more scoring opportunities.”

All of that dedication turned into a masterclass performance at Mike A. Myers Track & Soccer Stadium in Austin. The Lady Eagles won five individual or relay titles, scored in 10 events and put up 121 points, which is more than any other team – regardless of classification or gender – in the history of the UIL Championships.

The DeSoto Lady Eagles broke the national record and left their mark with their performance in the 4×100 Relay. The Lady Eagles flew around the track and crossed the finish line in 44.24, bettering their own national record of 44.44, which they established a few weeks earlier at the UIL Class 6A Region I Championships.

“We knew they were going to be able to run fast, but they surprised us,” Mrs. Villers said. “We moved some people around different spots to keep them healthy and to match their strengths, and it really paid off."

Their hard work continues. This year, the Lady Eagles qualified for the most events ever for the 2019 state track and field competitions. It's a major accomplishment, considering the challenges the young women had to hurdle this season.

"Until the Regional meet, we weren't really lucky with weather," Mrs. Villers said. "We either had very cold, cold, weather in the 30s and 40s or lots of wind. It never really allowed us to do what we wanted to do."

The tight-knit track and field team says it’s their chemistry, focus, and determination that keeps them running toward their goals.

Mrs. Villers has been winning many awards and changing students' futures for many years. In 2018, Mrs.Villers was named Coach of the Year and was inducted into the Texas Track and Field Coaches Association Hall of Fame on January 5, 2018.

"We are so proud of Coach Villers," said DeSoto ISD superintendent Dr. David C. Harris. "She is the example of what we would like to see all our kids accomplish. As a former DeSoto ISD student and athlete, to see her go off and finish school, start a career and return home, is what our district philosophy is all about—growing our kids to come back and serve the next generation of kids."

"Coach Villers is an excellent educator and coach," said DeSoto ISD athletic director Larry Davis. "The passion and expertise she extends to our students and student-athletes is unparalleled. We are extremely fortunate to have her counted among our staff. She is a shining example of the excellence we are working to develop in our students and student-athletes here in DeSoto ISD."

Some of her honors include:

sdsd Posted over a year ago

her commitment to excellence. I congratulate her for all her success and the lives she has positively impacted for years to come

Chris Henderson Posted over a year ago

Coach Villers has my respect as a coach, a professional educator, and a citizen of our community. I taught with her for several years and have witnessed firsthand her commitment to excellence. I congratulate her for all her success and the lives she has positively impacted for years to come. She is the epitome of a life-changer.

Diamond Posted over a year ago

I am a member of the 2007 Desoto state champion women’s track team. I don’t have enough words to describe how much of an impact being coached by coach villers has had on my life. She cares about us, pushes us and helped me reach incredible heights as an athlete. #LCOY