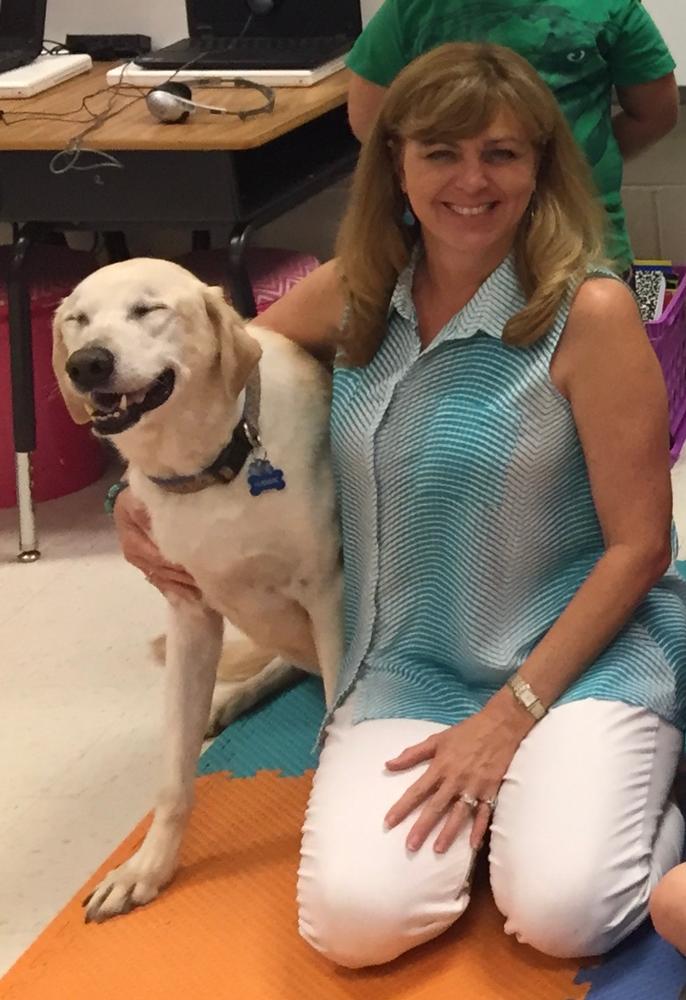 Cindy Bloodworth was nominated by her spouse, Keith Bloodworth.

"I would like to nominate the most dedicated teacher I know for the Life Changer of the Year award," Mr. Bloodworth said. "This very special educator is my wife, Cindy Bloodworth.  My wife Cindy teaches reading, phonics, language arts, math, social studies, and science to first grade students at Turner Woods Elementary School in Gray, Georgia.  Cindy spent 14 years as a stay at home mom before becoming a substitute teacher when our youngest of four sons started pre-k.  She knew then it was time to pursue her dream."

Mrs. Bloodworth began taking online classes in Braille so she could help her third son, Ethan, who was born blind.  She was hired as a kindergarten paraprofessional at Dames Ferry Elementary in Gray. She worked at the school during the day, and she studied at night to earn her teaching degree.  Mrs. Bloodworth graduated from Mercer University Tift College of Education in May 2005 with her Bachelor's degree in education. While being employed full time as a teacher, as well as taking care of her family, she worked hard and earned her Master's degree through Mercer University in 2009.

Mrs. Bloodworth taught third grade and first grade while at Dames Ferry. In the spring of her ninth year, Turner Woods Elementary School was preparing to open in her district.  Students and teachers for this new school were pulled from the three other existing elementary schools. She was asked by her principal to help open the new school.

As Turner Woods celebrates its tenth anniversary this year, Mrs. Bloodworth is working with her 12th class of first graders. During her time at Turner Woods, she has served on the discipline committee, and was a grade level representative for the Better Seeking Team. She worked on the committee for school accreditation from the Southern Association of Colleges and Schools, as well as the yearbook and the initial Positive Behavioral Interventions and Support team.

In 2018, Mrs. Bloodworth initiated a community service organization of third through fifth graders, Tigers on Mission, at her school. Her goal was to take the values and lessons she used each week while working with the youth group at Northridge Baptist Church and instill those lessons into this group of students at Turner Woods.  The Tigers on Mission group met monthly to make blankets, which they distributed at a local nursing home. Later, they made dog and cat toys, which they took to the local animal shelter.  Each monthly meeting began and ended with lessons on being thankful and giving back to the community through service and love.

"When our blind son retired his first Seeing Eye dog, Hawk, we adopted him," Mr. Bloodworth said. "Cindy worked for months researching and trying to talk her principal into allowing Hawk to be a part of her classroom.  When the principal finally agreed, Cindy took Hawk to school once per month to interact with her students.  Cindy was able to use Hawk to educate students throughout her school on service dogs.  Hawk was used as part of the Free Friday Rewards that Cindy's students earned.  Students were rewarded for positive behavior and were able to read with Hawk.  What the students didn't know was that Cindy listened as her struggling students read without fear and gained confidence in their ability to read with this very special dog."

Mrs. Bloodworth not only works hard at school, but she has worked with the youth group at Northridge Baptist for 15 years and taught Sunday School.  At church, she has also led the children's and youth choirs, works in the nursery, and teaches Vacation Bible School.  For the past 15 summers, she has helped chaperone the youth group on their week long mission trip to work with MissionFuge in inner cities around the south.

Mrs. Bloodworth was nominated and chosen to represent Turner Woods Elementary as the Teacher of the Year. She works tirelessly, bringing home lots of paperwork and planning lessons to try to reach each student who comes through her classroom.

"I have watched and listened as she agonized over students in her class, always trying to make sure they have what they need for school and at home," said Mr. Bloodworth. "As I have the privilege of watching her change lives every day, it is with great pleasure that I nominate my wife, Cindy Bloodworth, for Life Changer of the Year."

melissa-campos Posted over a year ago

I do not know her but after all she said she does inspire a lot of people and me so much respect for you because it is hard being blind and a teacher and after all you're doing for your students it's going to be worth it, I hope you win.

Gigi Middleton Posted over a year ago

I’ve known Cindy since she was in elementary school. She comes from an amazing, loving family, so it’s no wonder she grew up to be an awesome person, mom, teacher, friend, and all the other titles she wears. Congratulations Cindy for this nomination! I would vote for you anytime!!

Beverly Jones Posted over a year ago

Cindy is not only special to me but to all the young minds she influences.

Jane Worsham Posted over a year ago

Cindy Bloodworth has always been an asset to any organization. One of the most organized, disciplined child, teen ager, youth and adult I have had the Blessing to observe. I have watched her grow from birth to being a grandmother. Definitely deserving of honor and recognition!

Faye Johnson Posted over a year ago

I cannot think of a person more deserving than Cindy Bloodworth as life changer of the year. She is a Christian woman who loves God, family, friends, and her students. She takes each student under her wing as she teaches and nurtures them. She is always concerned with their education as well as making each one feel special in his or her own way. She has worked tirelessly at church with the youth definitely making a difference in many young, impressionable lives. All the sacrifices she makes definitely do not go unnoticed. This community, church, and school are very fortunate to have Mrs. Bloodworth.

Christie Bloodworth Posted over a year ago

My mother in law is truly amazing and selfless, and really deserves this. The crazy part is she doesn’t even realize how much she does for others because it’s just her natural reaction. She treats her students like her own kids and will do whatever she can to make sure they have what they need, including spending her own money in her classroom. I don’t know any other teacher that has gone this out of their way to teach students and make sure they leave her class equipped with life skills, instead of just sliding on to the next grade.

Misty Lunsford Posted over a year ago

Tracy Bloodworth Posted over a year ago

I couldn't be more proud to call you my Mother-in-law. I have seen the dedication you put into your classroom. I have had you tell me multiple times"if I could just bring that baby home with me." I know you love them and want them to achieve great things. You are a great teacher, but an even better person. I love you!