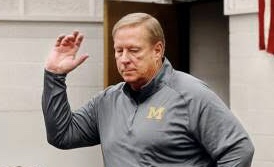 John Davis was nominated by an anonymous former student.

Mr. Davis is an example of positivity to both his students and the community. Throughout his many years at MCHS, his attitude of inspiration has led many of his students to enter the field of Music Education, including at least two Military Band members.  One of those students was not only the Drum Major on the OU Marching Band, but is now a herald trumpeter who has played for many monumental events that occurred in our country. Through his knowledge and sarcasm, Mr. Davis has taught his students music education, using methods to inspire his students.

Mr. Davis has done his best to teach while COVID-19 has limited the band world. He is a master of teaching marching band with the A/B schedule. Although contests are out of the question during this trying time, Mr. Davis has managed to use the marching band to raise the spirits of students and staff.

"Although the restrictions of COVID-19 hurt all areas of education, they've had the most detrimental effect on the arts," said his nominator. "As a parent with a child previously in his band program and another child currently in his program, there was never a time that they came home disappointed with instruction.  In fact, my current student has bemoaned the fact that COVID-19 has disrupted the marching season.  She cried when she heard that marching band might be cancelled.  Mr. Davis made it work. For the sake of his students, Mr. Davis has thought outside the box of typical education methods to ensure his students would be able to progress towards their marching band experience."

"Mr. Davis has been an avid influence on the aspect of family with his band students," said his nominator. "Many of his students are still in contact with members of their band family.  This aspect has been beneficial to the community.  Band IS a community!"

"John Davis is the master of overcoming the odds to make his program work," said his nominator. "I'm a former student, and he still inspires me."