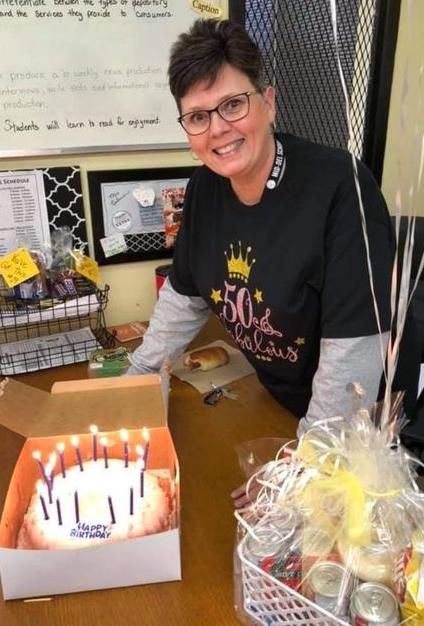 Kerri Bulman was nominated by an anonymous student.

Ms. Bulman is simply outstanding. She's known as the glue that holds her school together. In her yearbook class, students come together to create strong, creative memories throughout their lives in High School. Under her direction, multiple pupils have been inspired to pursue photography as a full time career. Her positive attitude and maternal intuition pushes and nurtures her students and colleagues. She's always ready to capture a memorable moment, and she has a camera with her at all times, taking pictures of students, school activities, decorations, awards, colleagues, athletic events, and so much more.

In her journalism (Bomber News) class, students come to together to create, write, produce, direct, edit, and perform in their very own skits and announcements . Many students have taken an interest in the journalism field because of Ms. Bulman's vast knowledge of media and film.

"Because of her, I am interested in working with the TV industry. I want to become an actor, voice actor, writer, producer and director, with the hopes of creating a tv show or movie of my own," said her nominator. "I would also like to pursue a job as a radio show host. I am also involved in the media branch in an organization called Youth and Government, all thanks to Ms. Bulman."

Ms. Bulman never loses a beat. You will never see her in a bad mood. Along with being intelligent, creative, and steadfast with a camera, she is also kind, loving, selfless, supportive, hilarious, and amazing. A handful of students look up to her and consider her as a "second mother."

"I am honored to have gotten to know her for three years now. I always look forward to seeing what project she has in store for us," said her nominator.