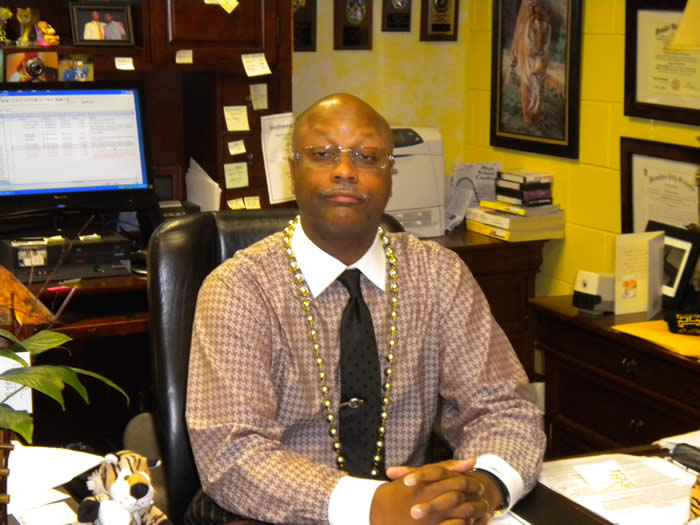 Dr. Vincent Hunter was nominated by Len Williams, a member of the community.

Dr. Hunter is in his 15th year as principal and was an assistant principal for three years prior. He grew up in Whitehaven in the 1970s, riding his bicycle to Manor Lake Elementary School and Lanier Junior High School. He is a 1982 Whitehaven graduate. Dr. Hunter describes the school as having a “close-knit family atmosphere." Twenty-eight alumni work on campus, from teachers to cafeteria and custodial workers.

“We really care about what we do, and we try to employ people who are products of our processes,” Hunter said.

The school has four assistant principals, each of whom oversee a particular grade level. There's also a guidance counselor for each of the four grades, as well as an additional counselor for the school’s “ninth grade academy.” Whitehaven High’s course offerings include the optional school curriculum, as well as marketing courses and trade and industrial education courses. It’s a reflection of the nearly 1,800 students, who all come from backgrounds.

With the school’s size and diversity, there is the potential for that mix to become volatile beyond academic challenges, but the community rallies around everything. First and foremost, they rally around the students' academic achievement. Whitehaven High touts its graduates’ scholarship offers by posting the dollar total on the school’s marquee, $88 million last year among 300 children in a graduating class of 448. By the Tennessee Department of Education’s report card for the 2014-2015 school year, Whitehaven High had an 85.3 percent graduation rate and a 16.7 average composite ACT score.

Football is another important element of the school's culture. Dr. Hunter is the school's former football coach, like his mentor, Tra Norville, who was Whitehaven’s principal for 17 years. The Tigers are nationally ranked and went undefeated to win the 2012 state championship. Dr. Hunter is quick to note that the school doesn’t have the community turf all to itself. There are two other high schools in Whitehaven: Hillcrest and Fairley. Southaven High School sits on the other side of the Mississippi state line.

Dr. Hunter is also the architect of the Memphis Empowerment Zone Improvement Program and Principal of the Year winner in 2019.