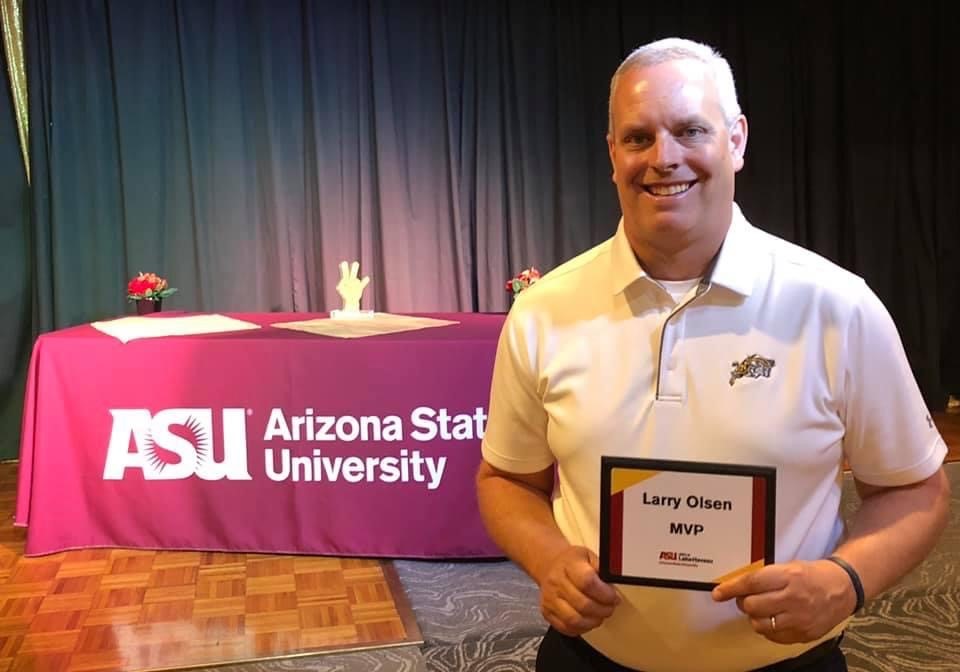 Larry Olsen was nominated by his colleague, Amy Barney.

Mr. Olsen has been employed by Lake Havasu Unified School District for over 30 years.  During that time, he has served as a math teacher, academic coach, athletic coach, and assistant principal before finally returning to teaching.  Mr. Olsen has been crucial to the success of many of the students and staff at Lake Havasu High School (LHHS).  He coordinates the Math Olympics program, working with the local community college (MCC), Arizona State University at Havasu, and other area schools to give students who excel in math an opportunity to compete.  He has fostered a relationship with the math lead at ASU Havasu to create a network between LHHS and a local college.  Mr. Olsen has used this relationship to provide free professional development to all of the math teachers at LHHS.  Additionally, he is the lead teacher for ASU's summer math camp, providing enrichment opportunities for students in grades 3-9 with additional volunteer opportunities for high school students.

When Mr. Olsen noticed students struggling with the academic and social transition to high school, he brought the SMART Math program to LHHS. This program provides incoming freshmen with the opportunity to spend three weeks on the high school campus learning essential math skills and inside tips for success in high school.  This program has grown to require four teachers.  Nearly 1/4 of all freshmen voluntarily enroll in this program.

Another way Mr. Olsen has impacted Lake Havasu City is through his mentorship.  Officially and unofficially, he has proven to be an incredible mentor.

"When I transferred to LHHS from a local elementary school, I was not provided with a mentor since I was already an experienced teacher," said Barney. "However, Mr. Olsen stepped up and showed me the ins and outs of LHHS.  He assured me that I had the necessary skills to make sure my students would be successful.  I have witnessed him do this repeatedly.  Recently, I have transitioned into the role of assistant principal...my go-to mentor is still Mr. Olsen.  He is always available to discuss best practices and how to balance the needs of students with the needs of staff."

Mr. Olsen is highly respected by his students.  He offers impeccable educational opportunities as well as personal advice.  Mr. Olsen is always looking for ways to help struggling students.  He works with families and other teachers to meet students' needs and find ways to support them.  Mr. Olsen has also helped coach students into the right college or career for them.  He has helped students get into some of the best colleges in America, including the Naval Academy and the Air Force Academy.

"Each year at Lake Havasu High School, we honor the top 20 students by inviting them to a formal dinner where they get the opportunity to dine with their most influential teacher," said Barney. "Mr. Olsen is a perpetual favorite and is often chosen by multiple students.  This is indicative of his far-reaching impact. Lake Havasu High School would not be where it is today without Mr. Olsen's leadership and service."

Diana Perrett Posted over a year ago

I first met Mr. Olsen as a sophomore in high school while taking algebra. Although I never disliked math, it wasn’t exactly my favorite subject. That changed after Mr. Olsen’s class. He was so engaging with us students and made math fun and easier to understand. I took pre-calculus with him the following year and I liked him so much that I spent my senior year as his teaching assistant. Mr. Olsen was such a positive role model for me when I really needed it. I credit a lot of my personal growth in high school to Mr. Olsen as well as my educational development. I think if more schools had teachers that genuinely care about their students like Mr. Olsen does, students would enjoy learning much more. Nearly 15 years after high school, I still consider Larry Olsen to be a friend and have loved watching his career flourish over the years. He is truly one of the best and deserves all the recognition in the world!

Eric Aurand Posted over a year ago

I have worked with Larry in many capacities related to helping students to have opportunities in STEM. He cares for his students as a whole student, not just in his capacity as a teacher, but as a mentor and, in many cases, a parental figure. I am also lucky as my daughters have had Larry as a teacher and mentor in many capacities. This nomination is fully deserved and I fully endorse it.

Annamarie Garcia Posted over a year ago

Mr.Olsen was my math teacher in high school. Pre-calc was easy to understand because of him. He is a great teacher and person. Thank you for all you do.

Leah Posted over a year ago

Thank you very much for always being there for our daughter. It has been so nice to have a teacher that connects with his students. You are very deserving of this award.

Christina Musselman Posted over a year ago

Mr. Olsen was my high school Algebra teacher when I was a junior. He’s always been one of my most memorable teachers, not only did he help student make connections and understand what we were learning at a deeper level, but he also took an interest in us as people and made an intentional effort to get to know us. Since that time, I’ve taught one of his daughters and my own daughter who was a junior was looking forward to having him as a teacher. She’s never been in his class officially, but she speaks very highly of him and it all comes back to how he intentionally creates relationships with students. Thank you, Mr. Olsen for all that you do!

Athena Still Posted over a year ago

My Daughter Xanthia, has been blessed to have Mr. Olsen this year for Algebra 3-4. She told me that “he makes math fun”. I’d say that in itself is quite an accomplishment! Thank you for all that you do to inspire your students.

Marsha Becker Posted over a year ago

Mr. Olsen has been a mentor to me my entire career as a teacher and volleyball coach. We shared a classroom when I was a younger teacher and I would watch how Mr. Olsen interacted with his students and made math fun! Mr. Olsen truly makes each student feel cared for and valued as an individual! He made me a better teacher and coach for students because of the example he set!

Nicole Casado Posted over a year ago

Larry Olsen was my son's math teacher in High School. Jason was lucky enough to have him for two years for Algebra 3-4 and two semeaters of DE math. Jason had no belief i. himself in his ability to succeed in math class prior to having Larry Olsen. Larry changed that. Jason went on to.complete all.university required math for premed and scored close to 700 on his SAT math section. He has developed a life time friendship with Mr..Olsen.