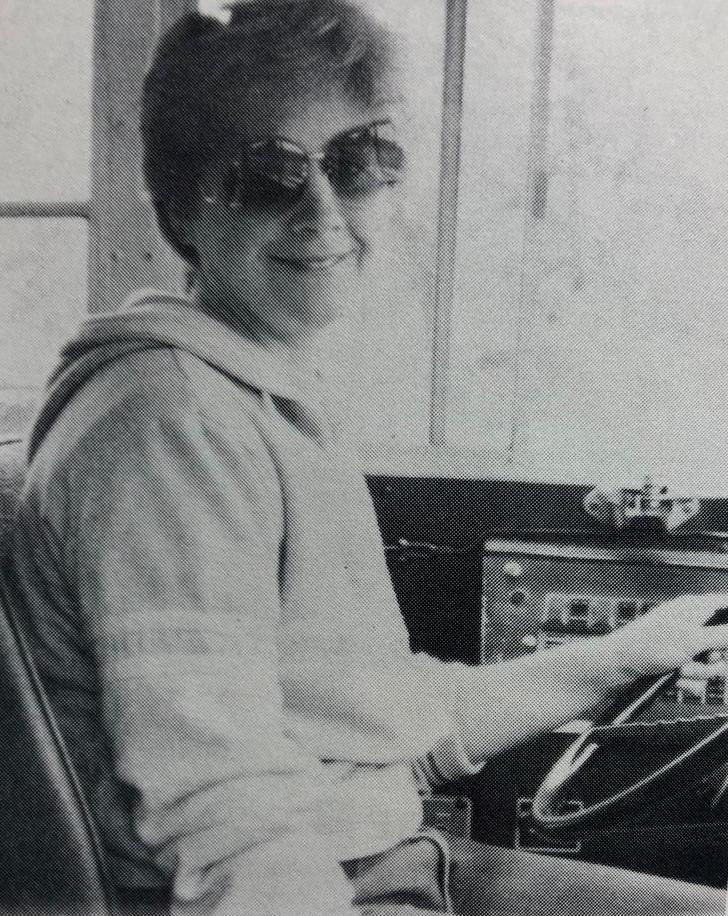 "This was hard to write," said Corey. "For one thing, when you've both worked about 30 years together, there are too many memories to write down. We had so many personal interactions. We had disasters, emergencies, and triumphs. We laughed, cried, yelled, and hugged. It’s also difficult to find the adequate words to accurately describe all the various interactions she has had with students, staff, community, parents, etc. She has worked under ten superintendents and who knows how many staff members, as well as hundreds of students in preschool through grade 12."

Ms. Slimp was hired in September 1985. What most people don’t know is that she was cautioned that there were some “issues” with the kids riding the bus, particularly the high school students. Without going into details, she had her work cut out for her. She rose to the occasion and had the bus run running smoothly within a short amount of time. It became apparent that she had grit and wasn’t afraid of a challenge. It was also a glimpse that she had some exceptional skills. Her rapport with students, parents, and the community benefitted all involved.

Because Ms. Slimp worked so well with everyone, it was determined that it would be beneficial to have her “in house” more often. At first, she was a little afraid of going into the classroom.

"She said to me, 'I’m not a teacher,'" said Corey. “And yet, she was one. There are many components to learning. Rox was not only able to help students academically, but in some cases, something even more. She taught students to believe in themselves and to try new things. She did it with an encouraging smile, laugh, a clap, or all three. Rox instilled confidence in the most reluctant learners.  Everyone felt comfortable and liked having her helping."

Ms. Slimp was a wizard at helping teachers set up activities and cleaning up. She was a marvel in the lunchroom and at recess. It would be impossible to count the number of students who she taught to swing, “legs up and in," or how many times you would see her playing four-square, basketball, soccer, Duck, Duck, Goose, or any number of activities. The whole time, she was encouraging good sportsmanship and helping students build their skills and confidence.

Everyone wanted to play with Ms. Slimp. She has boundless energy that she applied to whatever she was doing. She helped students learn to play together, which was important. Many of the students didn’t have much of an opportunity to socialize outside of school. She helped them develop social skills and confidence.

Ms. Slimp was fiercely loyal to her school. She was proud of her small school and its role in the community. She had high standards and expectations for her school. People (staff, students, community) rose to the occasion when they were around her. There are many examples where her standards and leadership reflected her pride in the school. On numerous occasions, she had discussions about how to make students respect the school and have pride in their accomplishments, if the school or bus looked shabby, or how the adults could model behavior that would instill pride.

Ms. Slimp is a tidy person who ALWAYS kept the buses clean. Every night, no matter what the weather was, Ms. Slimp could be found washing or at least rinsing the buses off if there was any dirt on them. The inside was just the same. The kids (and adults) learned there would be no garbage on the bus. She would spruce up the bus for Loyalty Day Parade to a point where it shined and made the community.

"There was no doubt she was the boss on the bus. I know my students would be surprised when we rode the bus and I told them she was the boss," said Corey. "I trusted both her driving and behavior management skills. She took so many field trips, it would be impossible to list them all: Expo in Canada, numerous trips to Seattle and Tacoma, up Snoqualmie Pass, classroom field trips, and more. It was always great to have Roxanne on a field trip. She wasn’t like other bus drivers I observed from other schools, who would stay in their buses until students returned. Oh no, Rox was out and about chaperoning students like everyone else."

Ms. Slimp not only attended to the duties required to do her job, but she was the first to help with any other activities. When anything needed to be done, you would hear her say, “I got it.” She applied her extraordinary energy to completing every task. She was instrumental in many extra-curricular activities, either setting up, participating, serving, cleaning up, or all the afore mentioned. Some examples include the Fall and Winter Festivals, Volunteer Tea, Potlucks, Movie Night, PTO, Auction, Graduation, and Field Day. She was never shy about dressing up on Halloween and Spirit Days. There were times when you would find her weeding the playground, sweeping the sidewalks. She helped her colleagues get their classrooms ready on more than one occasion.

"It would be impossible to adequately explain all the positive actions and her role in the school. I know she’s had a lasting impact on many students," said Corey. "She was a confidant, a teacher, and someone who was respected and relied upon.  She often said to me, 'I’m the first person students see in the morning and the last person they see at night.' Her goal was to make the best impression she could so the students would come to school happy and ready for their day. She safely dropped them off in the evening and ensured that every student went where they were supposed to be, with a good-bye, a smile, and a wave by both students and parents."