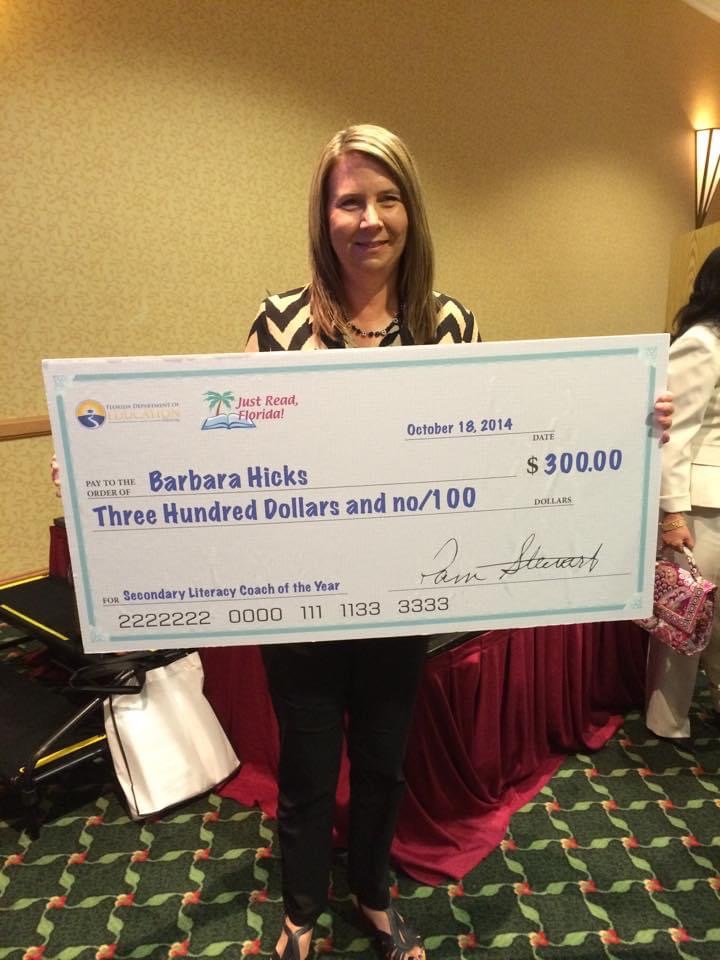 Barbara Hicks was nominated by her principal, Blythe Carpenter.

"I began working with Barbara Hicks in 2011, when she served as our school's literacy coach," said Carpenter. "Barbara's knowledge of how to teach students of every age how to read is nothing short of astounding! I've worked with Barbara at every level - elementary, middle, and high school. Everywhere she has worked, the struggling readers have shown marked improvement in their reading abilities. The data is consistent, and the results are nothing short of remarkable! When Barbara served as the literacy coach at Bay High School, she led the charge in intensive reading, improving our bottom quartile English Language Arts (ELA) performance from 38% to 62% on the Florida Comprehensive Achievement Test."

"In 2016, when I served as principal of Merriam Cherry Street Elementary School, I hired Barbara as my ELA Interventionist," said Carpenter. "We inherited a school that was graded an F by the state of Florida, and it was listed as one of the lowest 300 schools in the state. In our first year, Barbara was instrumental in helping us achieve a B grade. Our learning gains for our bottom quartile students improved from 10% to 67% that year! The following year, they rose again to 70%, as we earned an A grade. Finally, they rose yet again in year three to 83% as we maintained our A grade."

"In 2019, I was promoted to principal of Jinks Middle School. Barbara followed me to middle school, where she continues her good work helping our students excel," said Carpenter. "Jinks was rated a D school by the state, and our team arrived on campus with high expectations. Although the global pandemic prevented us from taking the Florida Standards Assessment (FSA), other data shows that our students are on track for marked improvement. The yearly NWEA-MAP data shows that our students have, in some cases, tripled their performance percentages in reading! Our students are currently taking the FSA for the first time in two years, and we believe that our students will show marked improvement when the results are released by the state."

Ms. Hicks has received many awards and accolades in her 30+ years as an educator. The two most significant awards are being named Bay District Schools' Teacher of the Year in 2006 and being recognized as the Secondary Literacy Coach of the Year in 2014 by Just Read Florida. Additionally, Ms. Hicks was recognized by the University of Florida as a "Distinguished Educator" in 2006.

While Ms. Hicks' accomplishments are certainly impressive, it is her heart for kids that truly sets her apart. Ms. Hicks has an uncanny ability to connect with some of the most difficult students and make them believe in themselves. They work hard for her because they trust her and know how much she cares for them.

"I've watched scores of students attain academic heights no one believed would be possible because of Barbara's investment in them," said Carpenter. "More important than the academic achievements, however, are the relationships that she has established with so many students. Barbara has bought clothing, shoes, school supplies, and food for more students than I could possibly keep up with over the years. This sort of care and concern has a way of shifting a school climate and culture. It's amazing what the students can do when they know that they have someone who loves them unconditionally and who only wants the best for them. Barbara will contact parents/guardians to brag about their child's positive choices or good grade on a test. She escorts many kids to the principal's office to have them read something they wrote in class, or to celebrate a good grade on an assignment."

Ms. Hicks serves on her school's leadership team. She has also served on multiple committees at the district level, as well. She mentors many new teachers and assists them as they fine tune their craft and become better educators. Ms. Hicks has a knack for setting the bar high for her students, while making them feel safe and loved as she pushes them to do and be their best. There is nothing she won't do for the betterment of her school and students. She has painted many walls in her school to make it a more inviting space. She has volunteered for multiple hours of clean up detail at her schools, and she has visited many kids and their families at their homes when they couldn't come to school to make sure they had what they needed. Her moral and ethical standards are above reproach because it is her heart that drives her to do what she does.

"You will not find a more talented teacher with a bigger heart for kids," said Carpenter. "Her passion is unmatched, her drive is unparalleled, and her love is immeasurable. I can think of no educator more worthy of this recognition."

I also have worked with Barbara Hicks at the Elementary and Middle School level. I agree 100% with Mrs. Carpenter. There is no one more deserving of this honor! Barbara Hicks is truly an EXCELLENT, CARING and DEVOTED educator. She IS a LIFECHANGER!