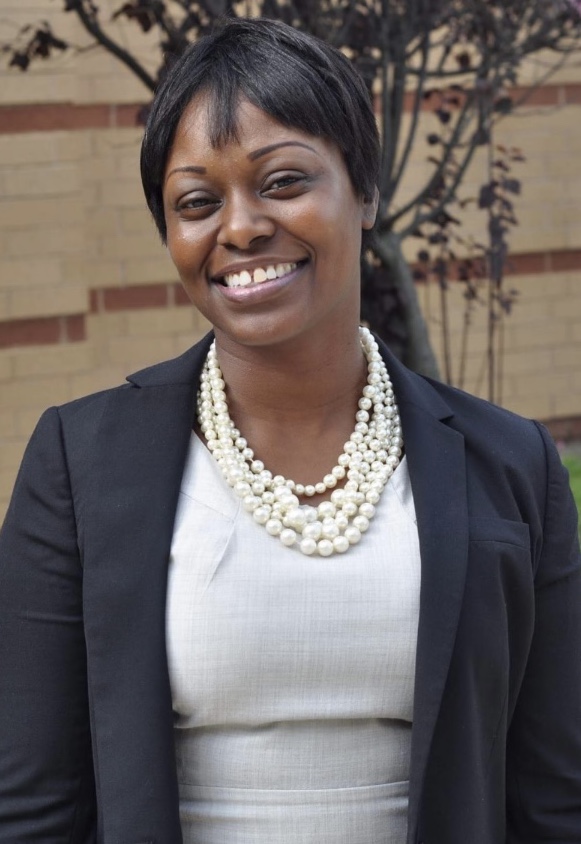 Amity Pope was nominated by her colleague, Keishia Thorpe.

Growing up as an African-American in America has been a constant struggle for Ms. Pope, as there are unwritten rules of expectations, both within the culture and outside of it. As a Black cisfemale there are countless social atrocities that she has had to overcome to get to where she is in life.  As a daughter and aunt of a Black father and nephews, Ms. Pope is hurt when she thinks about how society views Black boys and men. For her, it's the racism that exists and runs rampant as a result of the systems and structures that hold the space for those prejudices to thrive in full force.  For her growing up in America was stressful and unnerving.  However, Ms. Pope's mother, father, and grandmother were her initial influencers in life at an early age. Her mom always protected her and encouraged her to beat the rhythm of her own drum.  Her dad always listened to her talk for hours on end, and her grandmother always told her that she was destined for something great. Ms. Pope attest to the fact that those words alone have kept her putting one foot in front of the other in her darkest times in life.

As a native of Prince George’s county and a product of the county’s school system, Ms. Pope works as a mentor teacher for the district. Her social justice activism began in her first year of teaching, when she empowered her students to get the carpet taken out of their classroom due to a leaking ceiling and the health concerns they learned about with mold and asthma. After this win, she continued to advocate on behalf of students and her teachers. She rose to the ranks of becoming a trainer in her local and state association.

Soon after, she was appointed to chair the Government Relations Committee. She was also appointed to chair the Community Partners committee and elected as an At-Large member to the Board of Directors of the Prince George’s Educators Association. Using grassroots advocacy, she formed a Community Schools Advisory Board for Prince George’s County Public Schools composed of elected officials and community-based partners. The coalition has created a partnership with the Board of Education and has proposed that $2.1 billion be allocated for creating community schools, with a focus on food insecurity and economic disparities. Board policy 1100 - Community Schools was the result of Ms. Pope's vision, advocacy, and organizing.  A revised policy was submitted on 11/18/2021. She participated in this advocacy work and testified to this revision being accepted without objection.  The policy was passed unanimously on 11/18/2021.

As a Unit 1 member of the Prince George’s Educators’ Association, Ms. Pope served on the School-to-Prison Pipeline Focus Workgroup. Her direct participation resulted in recommendations on how to more effectively support students who might be more susceptible to removal from school under the school system’s current disciplinary policies and practices.  These recommendations were acknowledged by the CEO of PGCPS on 11/18/21.

As the co-founder of PG ChangeMakers, Ms. Pope has been influential in giving a voice to parents, teachers, and students who support the removal of armed law enforcement in schools. The creation of the Youth, Young Adults, and Parents Division is managed by Ms. Pope and led by its members, the students, and parents. As a result of the organization’s work, The Meyer Foundation has awarded PG ChangeMakers a $500,000 grant over a five-year period to support operational expenses. Her ongoing testimony in the Maryland General Assembly (MGA) for police reform and oversight in collaboration with ACLU MD and Maryland Coalition for Justice and Accountability resulted in several legislative updates during the 2021 MGA session.

The one thing Ms. Pope loves the most about her job is being able to see the direct effect of her mentoring and coaching on a teacher practitioner and the difference it has made for them in their life.

The information below shows how involved Ms. Pope is and her level of advocacy for social justice issues in education.

Maker of NBI-81: Using existing resources, NEA will issue guidelines for training and conduct of all police officers and school resource officers that operate on school grounds. The guidelines will include suggested procedures for use of force, interrogation methods, de-escalation techniques, cultural competence and the use of restorative justice practices. These guidelines will be publicized in all NEA online publications related to racial justice education. RA 2018

Maker of NBI-71: NEA will urge state associations to provide information to families, parents, and students on how to opt out of state-wide Common Core assessments. NEA will publicize this position via its online publications. RA 2018

Maker of NEA Resolution C-11. Safe Schools and Communities Amend by addition on page 42, line 29 of the white book to add:  NEA believes that children will be safer in school communities when the ratio of (1) qualified counselors, (2) social workers, (3) psychologists and (4) educators trained in restorative justice practices to students is adequate to the student population of the school, as recommended by the ASCA, SSWAA, NASP and the number of security and police officers in schools are eliminated. RA 2017

Maker of NEA Resolution C-13. Discipline Amend by addition on page 42, line 88 of the white book: The Association believes that law enforcement personnel in schools should not have arresting power. RA 2017

Maker of NBI 36: The National Education Association will collaborate with the ACLU and state member organizations to end the routine policing and arresting power of law enforcement in schools. RA 2017 -  RTC

Maryland State Educators Association - Presenter - Utilizing tenets of both social and economic justice, provided educators from the state of Maryland with innovative instructional practices pertaining to elements of effective questioning and discussion techniques for classroom based lessons.

Maker of NBI 18-10: Critical Race Theory which called for training on CRT to take place at the SLC as an elective.  This is now a part of the Racial and Social Justice Conference held by MSEA, annually. 2019 RA - ADOPTED

Maker of NBI 17-06: Develop Guidelines for Appropriate Law Enforcement Interactions in Public Schools MSEA will work with NEA to create guidelines for appropriate interactions of law enforcement in public schools. These interactions should promote and support educationally centered environments that do not disrupt teaching and learning. 2017 RA -ADOPTED

Continuing Professional Development Facilitator - Provides practical, realistic, research-supported suggestions for effectively managing a classroom for current classroom teachers.  Strategies can be implemented immediately.  Educators are strongly encouraged to look at their current teaching practices and reveal personal behaviors that may influence their current success or lack thereof, with students in the classroom.

National Assistant Principal Leadership Conference - Presenter - Presented on trauma and the impact it has on the mind, body and behavior.  Testifies on issues related to education and police reform via school board hearings.

Department of Mental Health: Mental Health First Aid Certification  - Certified to understand the signs of someone in distress, offer immediate support to minimize the distress, and if necessary, link the person to available professional or self-help support resources.

Education Roundtable Community Group - Reid Temple Coffee and Conversations - Invited as a guest lecturer/speaker to inform community members on Community Schools.  Engaged participants in being aware of the six pillars of community schools to include components of the PGCPS Community Schools policy, she spearheaded.