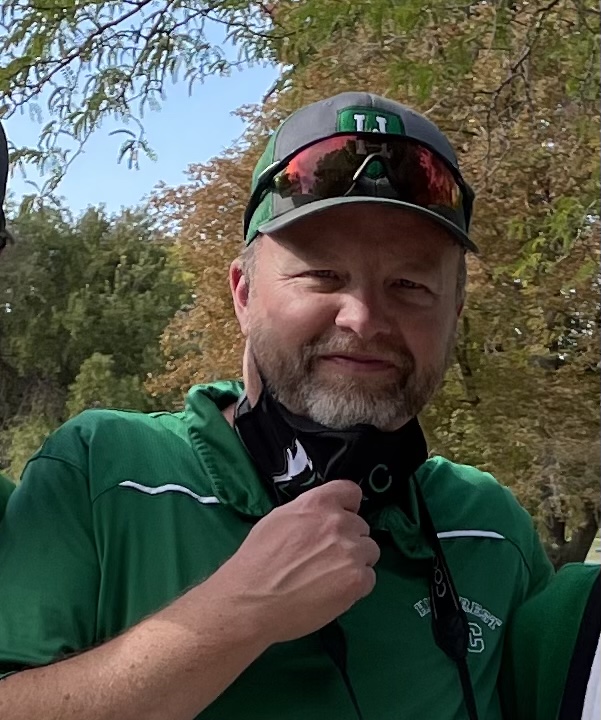 Scott Stucki was nominated by an anonymous parent.

"For the past seven years, I have known Scott Stucki as Hillcrest High’s cross-country and track head coach. I've appreciated his straight-forward, no-nonsense approach to coaching his student-athletes," said the parent.

While many sports may have “drama” about playing time or being on the varsity squad, with Coach Stucki, it’s straight-forward: the fastest students run varsity or make the relay – period. He'll only make an exception if there is an exception (i.e. too many events, injury, absence). It’s something the student-athletes know and respect. It’s a rule parents accept.

Some coaches have the attitude that everyone does the same workout because they're on a team. While Coach Stucki will plan workouts for the team, he will also individualize them. For example, last year, Coach Stucki had a standout runner. He’d conduct research and talk to his peers and college coaches to learn how to give this student-athlete more challenging workouts. Coach Stucki was willing to learn to become a better coach.

"The same can be said if he needs to lighten the load for novice runners or, in both of my daughters’ cases, the injured student-athletes," said the parent. "He'd adjust his workouts to what they could do so they could still be contributing members of the team, without further injuring themselves. Some days, it might be alternatives to running such as biking, hiking, or even walking the dog. As they both compete in multiple sports, he also delivers the news no athlete wants to hear – that they need to rest to heal their bodies, give themselves a break, and rejuvenate."

Coach Stucki is extremely knowledgeable about the sport, from upcoming runners around the state to Olympians, as he has been known to go to the Olympic trials several times. He also knows the mentality, nutrition, weights, endurance, flexibility, and the drive needed to improve and how to encourage student-athletes. He knows that, at times, the best approach is to allow the students to motivate one another. That said, he does hold his standing promise of a cartwheel when the team reaches its goal.

His student-athletes may come to him to learn how to pace or ask his advice on an upcoming race, but they'll also talk about his Mazda truck or the Utah State Aggies, as he’s willing to spend time with them and be a role model. Coach Stucki may not seem overly enthusiastic, but he’s willing and extends his care to student-athletes.

"I’ve witnessed it while runners have been hospitalized, as well as more recently, with overcoming the physical effects of COVID-19. When runners have given it their all, I’ve seen him tear up, more than once," said the parent.

"When Coach Stucki and I disagreed a few years back on a race, we listened to one another. I knew he had the interest of the team at heart and was doing what made sense, yet I disagreed on the impact it had on one athlete. Still, he gave me, a parent, respect. On the opposite end, when my daughter had a conflict and couldn’t make a time trial, Coach Stucki was willing to meet us that night, sacrificing more of his own time, to coach her in that run.  I have found few coaches would be willing to do so," said the parent.

The connection he has with parents is genuine. Coach Stucki will spend time with all parents, whether he's answering questions, advising them about Hillcrest, or talking about the potential of their runner. He communicates regularly with parents on a blog and through social media, so there’s rarely a question about anything, but he'll also say hi and talk to them when they’re at a meet. Because of that, many former athletes and parents come back to volunteer in numerous ways with the program.

"While Coach Stucki has been assistant coach and head coach for longer than the years I’ve known him, I’ve met many student-athletes who have the ultimate respect for him, even adults who he coached in middle school basketball," said the parent.

In the classroom, students have the utmost respect for him. He thoroughly teaches the subject and ensures both his students and others he knows are ready for the Advanced Placement exam. He creates study guides, holds numerous reviews, and cares about how well his students do. Coach Stucki even invites students who are not in his class to review and prepare with him. He takes the interest of all students to heart.

"It goes beyond teaching a curriculum and teaching to a test," said the parent. "When my youngest daughter was in middle school, she was learning capitals of countries around the world. He quizzed her on those, and he challenged her to learn rivers and mountains in each region. She was so encouraged by his interest in her learning that she jumped right on it. She discovered learning goes beyond what is expected, which is a lesson that has stuck with her. Little did she know that he shared her knowledge of knowing countries and their capitals with his students to motivate them.  She later learned this at a cross-country practice once she was in high school, when another student-athlete made the connection that she was the middle school student Coach Stucki highlighted in class. It helped forge friendships with her peers in high school, making the transition easier," said the parent.