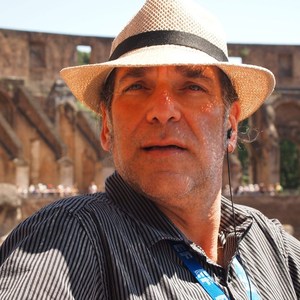 Benett "Berko" Berkowitz received multiple nominations from his students. Below are quotes from their nominations:

"Berko was a teacher everyone talked about," explains one student. "Every senior would tell you to take his class because he would change your life. I didn't get to take his class until my sophomore year, but he definitely changed my life."

"I was not a studious kid, nor was I driven or motivated. I had so much going on in my personal life that I couldn't care less about my school life. I was rebellious, but that didn't stop Berko from trying to teach me. He was a teacher who listened to his students and showed up for them in any way he could. He made learning fun, creative and exciting," said the student.

"His class was the one class I looked forward to going to every day. During lunch, I would sit in his class with 25 other students who enjoyed having lunch there and talk and vent about my home life. He made going home bearable. He made it so I wasn't scared to go home anymore, and on days when everything was too much, he would let me sit in his class while he taught other classes. I would enjoy listening to the books the other classes were reading and their projects. I don't think I would have made it out of high school alive if it wasn't for Berko. He was a real teacher that cared, and if anyone should win this award, it's him. He deserves it," said the student.

From another student: "Mr. Berkowitz gave me and so many other students good advice on what to do to succeed in and out of school. He made us realize what we are going to do once we left high school and how we are going to do what we want when we graduate. He gave us motivation to finish strong, and through all this he made us laugh and enjoy the subjects he taught. What I liked the most about Mr. Berkowitz is that he didn't only treat us like students but like humans and future adults."

I never attended Mr. Berkowitz class my sister and friends did and they all loved him. Mr. B is a very kind person and was always trying to get to know everyone. I will never forget my first day at school I didn’t know any English I just moved to America Mr. B said something to me and I was so scared of talking to people that I just passed by him. But it didn’t stop him from trying to get to know me. Later on. One of the best staff at Cleveland!

Mr. B cares so deeply about his students, even after they graduate - he is truly a life changer and certainly deserves to win this award!

Mr. B is a very awesome teacher and human being! He is very supportive and attentive, he doesn't judge you or discriminates anyone. He doesn't make you feel dumb and treats you like a person with valid emotions and thoughts. 10/10 would recommend as a teacher/ mentor and friend.

Awesome drama teacher. He accepted my daughter Morgan, who is on the autism spectrum. Gave her confidence and included her in all the performances. Best teacher ever.

You’re the best and so inspirational!! I hope you win :)

Want to give a huge thanks Mr. Berko I was his English class 10th grade 2009. He was one best teachers I had my 12 years of school. Loved the passion in which he taught. His class I extremely looked forward everyday. He made learning fun his stories made class time fly. Read so many amazing books with him. He took us many field trips one I’ll never forget we went to the museum of tolerance. Really did have me value things we had as other people went extrañe worse situations. I enjoyed his class so much I wanted to be his TA the following year but my counselor did make that happen I was so bummed. Always walked into his class knowing that hour was a new experience. We were like a family not just classmates. Thank you so much Mr. Berko super appreciate you.

One of the greatest and most honest teacher out there!

Berko is an amazing teacher! He taught me so many things, including how to be a better person. You always laughed when you were around him. He could brighten your day no matter what.

He took us to Edinburgh Scotland and changed my life! “We will always have Scotland!!” Thanks Berk! ????

Where to start? Mr. Berkowitz,Beckwith, also known as Berko to his students is an exceptional example of what an educator should be. He is one who truly cares about the happiness and success of every student. I am the parent of a prior student of his. My daughter had the out of this world opportunity to go to Scotland and see the Fringe Festival! Wow. Berko made it possible. He reached out to the people he needed to, he held parent meetings, he helped the students fundraiser in order to go on the trip. He took out of his own pocket, LOTS to help male this happen. It has been almost 7 years since my daughter was in his class. We still love and talk to him regularly. Any person who crosses patches with him knows he is a genuine ball of kindness!! His energy is contagious. He is definitely a life saver now, then, and as long as he lives! Thabk you Berko!??

Berko is an amazing teacher. He makes going to school every day worth it. He made such a big impact in my life when he was my teacher and still does today, 14 years later!

Berko was definitely the go to teacher! Besides being an awesome teacher he was the father figure to all of us in AOAT, he listened without jidgement and was there when needed. Can't thank Jim enough for all he did for us students Class of 2011 would not have been the same without you! Thank you Berko!!

Berko is an amazing teacher!! He loved every one of his students. He was always there for you and always helped us out, no matter what. Berko is a teacher I could never forget. Loved having him as a teacher. He taught me so many things, not just writing and poems, but to be a better person overall.

Mr.Berkowitz is one of the best teachers I've meet in my entire life, he is the most grateful, honest and caring teacher in the world.

Berkowitz is a great guy, they could make the greatest biopic based on his life.I’d watch that movie !

Berko has been one of the most influential teachers i have ever had he helped me through emotional issues when he didnt really have to. He always checks up on you to see if you are doing alright. And he is almost always there to have deep conversations with you that leave you thinking. He is extremely open minded and is a joy to talk too.

Me. Berkowitz is an incredible abs caring teacher. He is an amazing educator and he is always there to listen.

Berk is the best teacher I know if I’m having a bad day I know I can count on him to talk to , goooo Berk

Mr. Berkowitz is the best teacher in Cleveland high he gives us so much good advice to succeed in high school and outside of high school. He made us talk about our dream jobs and how we can get to that

I had Benett Berkowitz in Fall 2010 and I loved his class. He is like a father figure to all of his students, I took him because a friend recommended him to me and he easily became my favorite elective teacher. I had him for Drama, my one regret was not taking Drama B with him because I was overburdened by other classes. Class of 2012 here, I'm saying we need more teachers like Berkowitz. He is very genuine and actually cares.